A new season of Nova is upon us and it all starts out with the tale of Takezo Kensei and his sword... sort of.

For their season premiere, Nova is taking a page from Hiro Nakamura.  On Tuesday October 9 at 8pm ET/PT, Nova will be delving into the "Secrets of the Samurai Sword."

The episode spends the entire hour going through the entire six month process of the creation of a sword and the different steps fifteen different craftsman take in making sure the sword is perfect.  It is an entirely fascinating look at what seems to be an excruciatingly slow process.  Not only does the episode spend time with Gassan Sadatoshi, the swordsmith, it also delves into the actual smelting of the ore and charcoal that is used to make the steel.

Additionally, because simply looking at the craftsmen during the making of the process is not enough for Nova, the show also interviews numerous scientists who probe into the physics and chemistry of smelting, forging, and swordsmithing.  In fact, the show spends a great deal of time on how a samurai sword needs to be both "hard" and "tough."  A harder steel is created by having more carbon added to the iron, whereas the tough steel is lower carbon.  The hard steel can hold an edge, and is therefore made into the outside 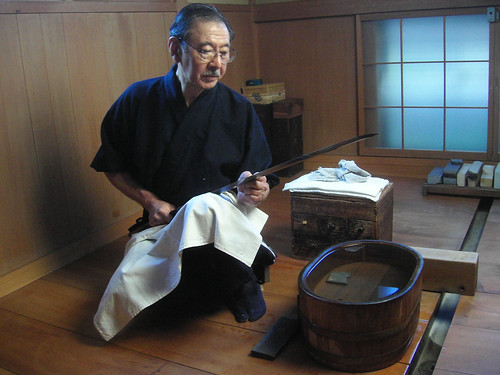 of the blade, whereas the tough steel is on the inside of the sword and makes it less brittle.

The show also spends a minimal amount of time on Midori Tanaka and her father Fumon Tanaka.  Fumon is a grand master swordsman, whereas Midori, a receptionist by day, learns how to wield a sword at night.  Through these two individuals, the episode explores the importance of the traditional in modern Japanese culture.  According to the episode, the legend of the samurai, and their code, is very much alive in Japan today.

It is this intersection of the traditional ways of swordsmithing with the understanding of what is taking place that modern science provides that is the most interesting aspect of the episode, in particular during the discussion of smelting and the use of the high and low carbon steel.  Hundreds of years ago, when the production of samurai swords began, the chemical composition was not yet understood, there was no molecular level understanding of why the two different colors of steel that emerged from the smelting process would function differently (one was high carbon, the other low).  Yet, smelters 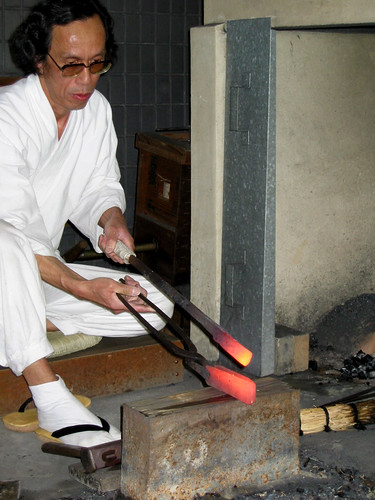 and swordsmiths were able to figure out how to get what type of steel (smelters watch their furnaces for three days straight to accomplish this) and which type to use where to make the best possible samurai sword.  Amazingly, it is the use of these two different types of steel that cause the samurai sword to naturally form its curved shape.

Despite this being the most interesting area of the show, there are moments when the episode does go a little overboard and gets too repetitive in the discussion of some aspects of the science.  It is then that that the episode loses some of the mysticism and wonder of what is taking place.  The juxtaposition of the ancient traditions with the modern world, outside of the scientific aspects, could have been strengthened slightly as well, as the story of the Tanakas is the real human bridge here and it does not truly fit in with the rest of the episode.  The story of the Tanakas is the story of the sword-wielders, not the sword-makers, and while the two are inextricably linked, they are not necessarily the same tale.

Despite these shortcomings, the season premiere of Nova is more than interesting and marks a strong entry point into a new season of discovery.

Nova – "Secrets of the Samurai Sword" airs on PBS stations Tuesday October 9 at 8pm ET/PT, but it is always a good idea to check your local listings anyway.