Tom Cruise works a crowd like Bill Clinton at an Ozarks beauty pageant. Both appear to be never more alive or at home in their skin than when pressing the flesh and wobbling the jaws with an adoring throng. Basking in the limelight and showering the crowd with his magnanimity, Cruise spent four hours yesterday talking to many of the estimated 3,000 fans waiting on the red carpet outside the UK premiere of his latest movie, Mission: Impossible III.

The new dad’s face turned from happy to sad when booed by the crowd as he interrupted his glory shower after two hours to enter the Odeon Leicester Square movie theater and introduce the film. But having done so, he returned briskly to resume hobnobbing with fans, talking to stunned interlocutors on the other end of their cell phones, and signing autographs with the toothy high-beams in full effect. Cruise even made 80 year-old Dorothy Milton’s millennium by adorning her cheek with a Cruisian birthday kiss. 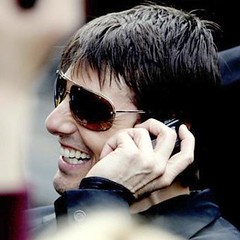 His fiancée Katie Holmes gave birth to their daughter Suri last Tuesday and Cruise had not planned to attend the London opening as a result; but reportedly Holmes, a movie star of sorts in her own right, persuaded the leading man that the show must go on, said break a leg, the sun will come out tomorrow, and other showbiz code stuff.

When asked if he was missing young Suri, Cruise said, “How can you not? She’s beautiful.” He also said he was in near constant audio contact with Holmes while away. 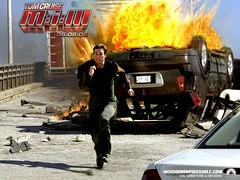 Cruise was in Rome Monday for the opening there, and in Paris today for the French premiere of M:I:3, also starring Oscar winner Philip Seymour Hoffman and Ving Rhames. The JJ Abrams-directed film will be released worldwide in the first week of May.

The star will be hosting, through the miracle of tape delay, TEENick on Nickelodeon this weekend, chatting with the teens and tweens and demonstrating some stunt action.