I am ready to turn over a new leaf regarding Tom Cruise: the Scientology stuff is still way creepy and I have my concerns about what kind of pod-person mojo he has unleashed on little Katie Holmes (who has invariably been described as “impassive” and “vacant” over the last several months), but, by gum, he seems genuinely charged up about baby Suri, and if he is so am I.

Cruise strikes me as genuinely enjoying kids in general, which is a mightly redeeming trait even for a podboy; and though it may all be ultimately tied to pumping the product, I am not in a cynical mood today so I am willing to take his ongoing relationship with Nickelodeon, for example, at face value. Cruise is often present at the Nick’s annual Kid’s Choice Awards, and he has been the featured celebrity slime victim – an ordeal he endured with good humor.

Now Cruise is hooking up with Nickelodeon again to give kids the inside scoop on performing Mission: Impossible: III-style movie stunts, his childhood ambitions, and the best way to prepare for a car chase scene as the celebrity host of Nick’s weekend tween programming block, TEENick, premiering Saturday, April 29 between 8:00-10:00 PM and Sunday, April 30 from 6:00-9:00 PM. 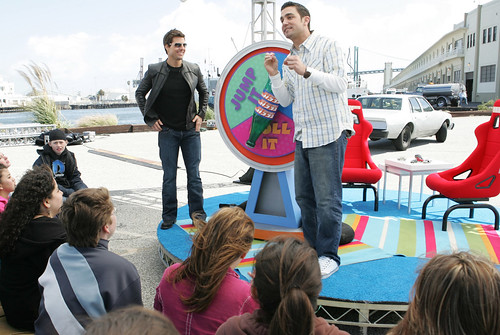 (Tom Cruise joins TEENick host J Boogie to chat with the youth about movie stunts, his childhood ambitions and the best way to prepare for a car chase scene)

Kicking off the TEENick segment taped in front of a live audience on the docks in San Pedro, California, on April 5, Cruise wows viewers and alarmed passersby with a helicopter entrance, then is joined by legendary M:I:III stunt coordinator Vic Armstrong to demonstrate preparation and execution of a car-flip stunt.

The kids ask the new dad questions like: “When you were little, what did you want to be when you grew up?” (an actor or an astronaut), “Who is your favorite athlete?“ (Mohammad Ali), and “What is your fondest childhood memory?” (traveling).

New this year is a series of “TEENick Behind The Scenes” nights, which offer kids an inside look at celebrities in their own environment: TEENick hit the half pipe with Tony Hawk’s Boom Boom Huck Jam Tour in San Diego, got a backstage pass with the American Idol Live Tour in Philadelphia, and learned the secrets of Ryan Cabrera’s gravity defying hair on tour in Albany.