In which we witness the pressure cooker of twenty-first century teenage life with what feels like scary accuracy.

Theater Review: The Fabulous Life of a Size Zero in New York

Jon Sobel June 20, 2007 Comments Off on Theater Review: The Fabulous Life of a Size Zero in New York 112 Views

Marissa Kamin's The Fabulous Life of a Size Zero is about as up-to-the-minute as a play can be. It's too sweet to feel edgy, but via sharp, racy dialogue, sparkling performances, and immersion in the culture of the YouTube-and-bulimia generation, we witness the pressure cooker of twenty-first century teenage life with what feels like scary accuracy.

Like an episode of Law and Order, the play seems "ripped from the headlines." Gillian Jacobs gives a broadly acted yet finely tuned performance as Girl, a high school senior with spectacular test scores and a stellar record who nonetheless has to worry about whether she'll get into an Ivy League school as she hopes to (and as her father expects). Meanwhile the pressure to be fashionable, thin, pretty, and sexually active – but not slutty – squeezes her from another angle. Bulimia, cutting, and drug abuse jostle with celebrity worship, blog culture, Facebook-style social networking, and academic pressure, in a nobody-wins battle for the frayed souls of Girl and her schoolmates.

Kamin, along with director Ben Rimalower, cleverly uses artificial forms to show us an unfortunately all-too-real world. Girl and her more carefree and effusive friend, Girl Chorus (the charming, elfin Anna Chlumsky of the My Girl movies) emerge from snappy, highly distilled dialogue as vividly sympathetic child-women. "Which diet are you going to do?" "I don't know… Moderation?" (Hysterical laughter.) The script is full of such pithy if not actually deep bon mots. "The world is just a big high school, except that instead of popular kids there are celebrities." These transparent quips flow from the stage in such numbers and with such good cheer that they add up to something affecting. 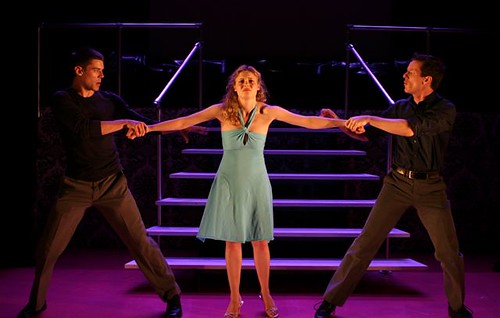 Brian J. Smith, Gillian Jacobs and Christopher Sloan in The Fabulous Life of a Size Zero. Photo by Monique Carboni.
The funny and versatile Christopher Sloan and Brian J. Smith mug through an assortment of (mostly) male roles, while the impossibly perky Kate Reinders – who's done the Kristin Chenoweth part in Wicked on Broadway (and it's obvious why) – is perfectly cast as Superstar, a Barbie doll figure who functions as a sort of modern god or elemental force, a combination club-kid celeb and game show host who mentors and hectors Girl through her social evolution.

As brilliantly honed as any of the human characters is Wilson Chin's wonderful, red-themed set. The simple, symmetrical design, abetted by superior lighting, morphs effortlessly from teenager's room to dance club to college campus and back. During the nightclub scenes there's even some deliciously dry-eyed dancing. Deft blocking, def music, and transitional video cues combine with Kamin's machine-gun dialogue to propel the action along at TV commercial speed. (Even a smoke alarm that interrupted the play and sent audience, cast, and crew outside to mill about on the sidewalk for half an hour didn't faze the actors, who picked right up where they left off.)

Amid the cyber-vaudevillian razzmatazz, one can overlook the serious situation the play is actually about – but not entirely. As depicted here, things are pretty terrible for today's high school kids, even – or especially – suburban high achievers. Are we wrong for enjoying ourselves at their expense at the theater? Well – no actual teenagers are injured during the production. Which brings us to the evening's only significant flaw, the ending, also ripped from the headlines. It's more a droop than the shock that was probably intended. Still, on almost every count it's worth seeing this top-notch cast in an exhilirating and thoroughly current piece of stagecraft.