A delightful romp of a show for kids of most ages - and for any adult with a yen for fun.

Aimed at "the tween in all of us," the brash, sparkling new musical Wanda's World lives up to its billing splendidly. Director-choreographer Lynne Taylor-Corbett fashions Beth Falcone's rock and pop-inspired tunes into a series of colorful song-and-dance numbers that tug the ear, delight the eye, and yank you through the story in spite of yourself.

It's a story with universal kid appeal, including the kids who still live inside adults. Thirteen-year-old Wanda, played by a petite firecracker named Sandie Rosa, has a rich imaginative life: she stars in her own TV show, but only in her bedroom, attended solely by her loyal dog Spangles (Chris Vettel). In real life, Wanda is starting at a new school and terrified of not making any friends. An additional, more unusual problem magnifies her fears, and things look grim when we're introduced to the cliquey kids she's going to be thrown in with.

A number called "She's So Last Week" exemplifies the show's cleverness, as the popular girls quiz Wanda on what bands she likes and so forth. Putting on a friendly front, cheerleader Jenny Hightower (Jennifer Bowles) undercuts the newcomer with every other line. Meanwhile, football star and straight-A heartthrob Ty Belvedere (the superb tenor James Royce Edwards) is running for class president. In his number "What's Not to Like?" he extols his own perfect virtues while allowing a peek at the good heart inside. When jealous P.J. Dunbar (Leo Ash Evens) prods Wanda and her video camera to pursue Ty to his house for a post-game interview, a dangerous, if not very original, scheme is afoot.

It's a feel-good tale that actually makes you feel good, not icky. Encouraged by a pair of sympathetic teachers, played twinkly-eyed by Broadway veteran Valerie Wright and the delightful Mr. Vettel, Wanda's true talents and social skills emerge. The "villians" get their comeuppance without cruelty, and there's even a romantic side plot furthered by a couple of charming cups of coffee. Though directed pointedly at "tweens" – kids roughly ten to twelve – the show mostly held the attention of my not-quite-eight-year-old companion, who "liked the dog" but also, as it turned out later at "how was the show?" time, had followed most of the fairly complex plot and was anxious to relate it. 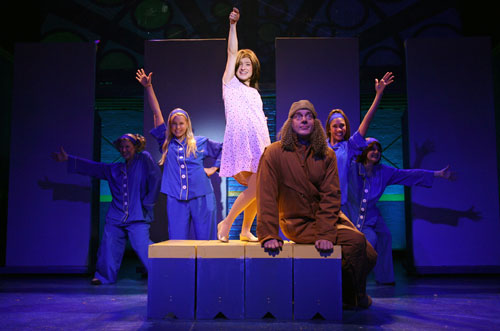 The performances are excellent, with not a single weak link. A few colorfully painted pieces of furniture and backdrop video effects create the necessary schoolyard, TV studio, and bedroom sets, while Aaron Spivey's inventive lighting and Jennifer Caprio's wonderful costumes are almost supporting characters of their own, especially during the appropriately garish and slightly scary Halloween Dance segment. Only a small technical problem with one of the microphones (and the small stage) reminded us that we weren't seeing a full-on Broadway production.

Speaking of Broadway, Wanda's World is rather long for a one-act; it would take only a modest expansion to turn it into a two-act fit for the Broadway stage. It has all the ingredients. The spoken scenes – written by Eric H. Weinberger, who cooked up the story with Ms. Falcone – are just long enough to advance the plot and give us needed breathers between the highly energized musical numbers. And the limber cast delivers it all with kid-friendly, enlarged realism.

The music itself relies on kicked-up but fluid modern rock arrangements of a fairly small number of easy-to-grasp themes. It's not easy to write and arrange music that seems to effortlessly balance simplicity and fun with originality and musical literacy. Ms. Falcone, with musical director Douglas Oberhamer, has done so.

In short, this romp of a show is a pure delight, appropriate for any but the smallest children, and for any adult with a yen for fun. Wanda's World, presented by Amas Musical Theatre, plays through Feb. 10 at the 45th Street Theatre, 354 W. 45 St., NYC. Tickets at Theatermania or call (212) 352-3101.

A concert of programmatic music by Holst, Saint-Saëns and Respighi opened this year's festival in style, back live (and online) after an all-online 2021.