It spoofs Off-Broadway and the gay club scene, yet it's a delicious entertainment for everyone.

Theater Review (NYC): The Play About the Naked Guy

Jon Sobel February 10, 2008 Comments Off on Theater Review (NYC): The Play About the Naked Guy 359 Views

David Bell's breezy, witty, colorful comedy The Play About the Naked Guy cleverly sends up Off- and Off-Off-Broadway and takes a hilarious poke at the gay nightclub scene as well. If that leads you to imagine a lot of in-jokes and self-referential gags, you're right, but don't let that deter you from seeing this delicious confection.

Gay or straight, backstage insider or casual playgoer, you'll come out in a jolly mood. The one-liners and flashy bits zip rapidly by, but if you miss one, six even better ones are on the way.

Mrs. Anderson: Those were my husband's final words.

The plot may be a little Swiss Cheesy, but no matter. The Integrity Players are in dire straits: down to three company members, they can't draw an audience to their "lesser known classics," but Artistic Director Dan (Jason Schuchman) refuses to compromise his principles and do anything more commercial. 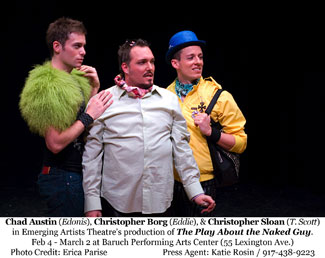 Dan and his wife Amanda (Stacy Mayer) have a baby on the way, and no money to raise it unless they give up their artistic dream and cave in to Amanda's overbearing mother (the hilariously regal Ellen Reilly), who's about to withdraw her funding of the failing company.

Harold (Wayne Henry), Integrity's third remaining member, is an actor with great talent but a sad personal life. His loneliness leads him to a club where he meets the Bialystock-like Eddie Russini (Christopher Borg), a producer who's grown rich on gimmicky, gay-themed stage shows like "Naked Boys Running Around Naked". 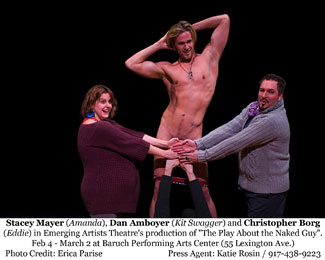 Kit: I have a new master! And his name is Uta Hagen!

With a lot of help from director Tom Wojtunik and a fine cast and crew, Bell has created an entertainment that's sweet-natured and smart, very funny with just the needed touches of touchingness.

He plays each of his plot strands fully through — the coming out story, the love elements, the character development — even as he mocks his characters, the crass and the pretentious alike. Sometimes Bell seems to be reading my critic's mind; his spoof of small theater companies' invariably vapid mission statements is priceless.

Insider references aside, The Play About the Naked Guy is a show for all of us – all of us grown-ups, anyway. Might want to leave the little 'uns at home for this one.

Presented by the Emerging Artists Theater at the Baruch Performing Arts Center, which ably plays itself in this production, in repertory through March 2. Buy tickets online or call (866) 811-4111.