Commitment problems are the standard male character flaw of our age, but "Carter" is a compelling, even sympathetic bastard.

Probably the hardest thing about writing any kind of fiction is maintaining integrity throughout the work — integrity of tone, a consistent world, and — on the stage — characters who become real people before our eyes even though we are in the extraordinarily artificial setting of the theater.

The four characters in Ben Cikanek's new comedy come alive for us, rooted in the script but thanks also to solid, sometimes superb, acting and Mike Klar's wise direction. Storywise, Cikanek isn't concerned with giving us anything particularly new — this is a modern romance about two men and two women who simply want love and happiness. However, his particular gifts for dialogue and character development give this talky play a consistent and compelling voice.

It's New Year's Eve, and Nathaniel, who is gay, suggests hooking up his friend Charlie, who is female, with his straight roommate, Carter, who is volatile, and, tonight, very drunk. (Got that?) Instead, Carter brings home Annie, whom he's just met. Cut to two years later: Annie's moved in with the boys, but Carter's working long hours and neglecting her. Meanwhile, Charlie's even more alone and uncertain about herself than before.

The story veers between borderline-campy comedy and focused drama, but the transitions are smooth, and it all (or nearly all) works because the characters rapidly become entertaining, clever, and "real" people we enjoy spending time with, despite — or rather because of — their flaws. It's a good thing, too, because in tiny Theater C at the 59E59 Theaters complex, we're truly up close and personal with the cast.

Carter has commitment problems. That's the standard male character flaw of our age of course, but the handsome, wiry actor, Kurt Rodeghiero, makes him a compelling, even sympathetic, bastard. 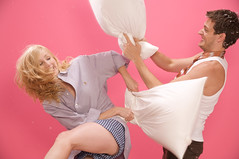 Little touches, like his odd mispronunciation of his roommate's name, and his difficulty remembering Charlie's, help fill out his three dimensions.

Carter's exchanges with Annie resound with true-life anguish, and that's half because of Rachel Jordan Brown, who plays Annie with a whininess that starts out annoying but proves a useful springboard for the explosive later development of her character.

She's also both sexy and funny, and that brings us to Nathaniel. Tom Baran plays the roommate with sly humor, making the most of his character's broad physicality and relatively limited opportunity for development. Most important, he makes us laugh — a lot.

Finally, Ginny Myers Lee handles the key role of Charlie with wit and pathos, though, like Nathaniel, she's a little more caricatured than Carter and Annie – in her case, as the smart but flighty twentysomething.

One or two scenes go on a touch too long, and one or two backstory plot points are a little unclear, but overall, the intermissionless 100 minutes go by breezily. The only sour note is a little burst of overly poetic language that comes after the two big monologues in the climactic window-ledge scene. (It's a rule: any play that takes place in New York City and concerns ungrounded, single people approaching thirty has to include a window-ledge scene, otherwise it can't get a development grant.) The over-the-top verbiage sticks out like a sore big toe from a play that otherwise maintains its integrity of tone so admirably.