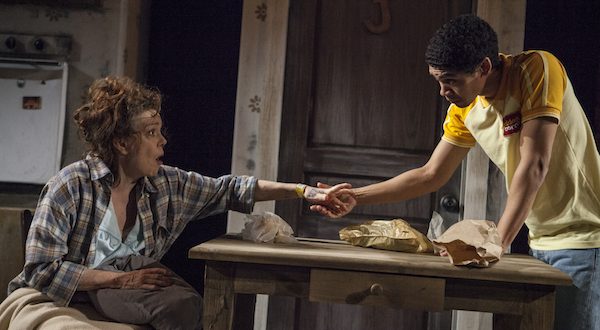 The New York premiere of Gabriel Jason Dean’s Terminus is one of the finest productions I’ve seen in a long time. Never mind that it’s in New York Theatre Workshop’s small Next Door space. Of sprawling imaginative power, yet focused in delivery, it takes on a tremendous weight – the intractable problem of race in the United States – and conveys something both gripping and original, marshaling with near-flawless mastery a bevy of time-honored stage techniques.

A family drama that’s also a kind of ghost story, the production centers on a stupendous performance by Deirdre O’Connell as Eller, a southern grandmother deep in delusional dementia, lost in time – “I don’t know when I am” – and both soothed and harassed by the ghosts of her haunted past even as her devoted mixed-race grandson Jaybo (a revelatory performance by Reynaldo Piniella) strains to care for her in the present.

Paced and acted with smooth naturalism, the play yet achieves and easeful, elevated poeticism. Dean’s script captures the spoken rhythms of multiple generations of the small-town Georgia working class in the 1950s and the 1990s. It teases the mystery at the story’s heart with a carefully calibrated recipe of hints, detours, and development, sustaining momentum and capturing attention without flagging. I can’t remember the last time I saw an intermission-less full-length play that created a world I would have been happy to linger in well beyond its written length.

Director Lucie Tiberghien makes excellent use of the elongated stage area, a setup than can make for uncomfortable viewing but here works just fine. I had the advantage of a center seat, so I don’t know how it plays from the far ends, but the young people who made up most of the audience from end to end were rapt from start to finish, picking up on each moment of humor and pathos quicker than I did. A playful and pathetic attempt at romance by young Jaybo and a cooler-n-hell female hobo named Finch (a knowing turn by Vanessa Butler) certainly does no damage to the play’s multigenerational appeal; it also helps to color and flesh out the Shepard-esque darkness at the core.

Religion, delusion, a gun, and a literal oncoming train swirl around that black hole. Encompassing it, D’Vaughn Agu’s single set transforms magically between the interior and exterior of Eller’s house by the train tracks. Illuminating it, the company sings hymns in rich harmonies somehow both earthy and celestial. (Jessie Dean, in the small but important role of Eller’s mother, has an especially burnished voice). And all the while, racially charged violence, real and imaginary, power the story forward.

All that being said, it’s O’Connell’s white-hot portrayal of Eller that rockets the show into the stratosphere. Frightened girl, earth mother, rusty old wreck, fallen angel, she’s lived a life larger than life, yet feels as real as cemetery dirt. She makes Terminus one show I won’t forget. The Monk Parrots production is at New York Theatre Workshop until March 10. Buy tickets online or call 212-460-5475.