After an extensive run through Norway, where it originated, a powerful little piece of theater called Fabrik, subtitled The Legend of M. Rabinowitz, has landed in New York City. A historical drama about Norwegian Jews prior to and during the Holocaust, Fabrik is told through puppetry, music, miniatures, and masks, but its power lies in its fusion of crafty stage magic with a near-minimalist – dare I say Lutheran? – economy of narrative.

The Wakka Wakka Ensemble's three talented puppeteers and whip-smart production team present the true story of Moritz Rabinowitz, who immigrated from Poland to Norway in 1911. Starting with very little, he eventually became a prominent businessman with a chain of clothing stores. But he was also a prolific writer of articles attacking anti-Semitism and warning Norwegians about the rise of Hitler. Upon the German invasion of Norway in 1940, Rabinowitz's volubility caused the Nazis to perceive him as the leader of the local Jewish resistance. 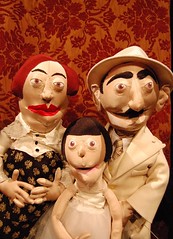 This is an edge-of-your-seat production, and waiting to learn whether Moritz will escape the Nazis is the least of the reasons for the suspense. Scenes of commerce, domesticity, battle, singing, dancing, and the play's centerpiece, a lovely and terrifying dream sequence, flow smoothly one into the next, but from moment to moment we almost never know what's coming. In the midst of every kind of theatrical artifice, we are completely swept up in the reality of the story.

This, I know, is a big reason people use puppetry and other distancing techniques. Just as storylines that wouldn't work on a live-action sitcom can feel touching and real on The Simpsons, puppets can create a magical space that frees our minds in a way live actors – because we feel their presence so viscerally – cannot. 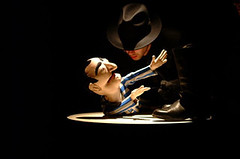 The Wakka Wakka Ensemble masterfully employs fabrication to sharpen history's blurry reality, and not only through their puppets and masks, evocative and magnetic as those are. Blasting through a darkened theater, a German spotlight seeks out the puppet-boat on which puppet-Moritz has purchased an attempt at escape to England. The air over the stage has become the water of the harbor merely through sound and the motion of the puppet figures and puppet props. In another scene on another scale, a miniature Nazi ship slides into the miniature town's miniature harbor, and I literally saw the tiny vessel bobbing in the "water," though it wasn't bobbing at all.

A brutal Nazi guard is nothing but a pair of boots – no more is needed. A murderous-looking mask stunningly personifies the evil behind the infamous, fraudulent Protocols of the Elders of Zion. And so on. It feels pedestrian and a little bit wrong to even be picking out such moments, since the play is so seamless. Indeed, the production itself felt like such a team effort that the printed program's failure to list which ensemble members were the actual puppeteers, and the identities of all of the many characters they portrayed, seemed not just okay but appropriate. But I hope they give you a sense of Fabrik's many small marvels, and of why it is well worth seeing.