An Iraqi immigrant who knows he cannot be loved invites hatred and abuse instead, because at least it's something.

There are two compelling reasons to see the new production of Dirt at Under St. Marks. First: after this important play's current run, it's off to the Edinburgh Fringe Festival, and who knows if or when it'll be back in New York. Second: Austrian-American actor Christopher John Domig's performance is one of those in which a play and an actor's work within the play seem inextricably bound.

Certainly, another actor could perform this one-man show, but while you're watching Domig, you can't imagine it. (Domig is actually responsible for having the play translated into English from the original German, in which the title is Dreck.)

Sad (Domig) is an illegal Iraqi immigrant working as a peddler in a western city. Paul Dvorak's potent translation suggests that the city is New York, but it could be anywhere in the West. Created by Austrian playwright Robert Schneider in the early 1990s in response to the first Iraq war, the character of Sad (short for Saddam) could be any alienated immigrant from a non-first-world country transplanted to any rich city.

On another level, though, Sad's monologue hits very specific targets. Domig's complete fusion with his character makes him a particular kind of Everyman, displaced and struggling, but induced to bottle up his anger and turn it against himself. 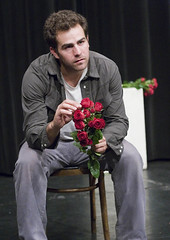 The monologue is punctuated by the phrase "I have no right to…" Sad feels he has no right to shout, to use public toilets, even to sit. "I'd never sit down on a park bench in this city."  Yet, in a tricky and sometimes scary game with the audience, he continually accuses himself of lying. Is his name even Saddam? "The truth is never elegant," he says, and though that may not always be the case for us, we accept — we know — that it is for him.

Whoever he is, he knows he cannot be loved, so he invites hatred and abuse instead because at least it's something. The blatant racism of Austria, circa 1992, may not have an exact corollary in New York City in 2008 — neither does the presence of public toilets, incidentally — but that's all the more reason to see the play now and explore this particular heart of darkness; it's easy to forget that it is always lurking.

The "story" is all interior to Sad's mind, yet the play feels as closely plotted as if it were a cleverly made, multi-character drama. The themes and repetitions in Schneider's language suggest a carefully constructed musical piece, a sonata or symphony. (The action is aided by subtle sound design by Greg Brostrom.) "My name is Sad, but I am not sad…"

When you leave the theater, you're thinking about the excellent performance and the fine writing, but after sleeping on it, you're left thinking, rather gloomily, about what it all means, and how startlingly relevant it remains even though it was written after a different and much smaller war.