This parody of the Tennessee Williams classic is grotesque in the original and best sense of the word.

Just as there are all sorts of dramatic traditions, from Elizabethan to operatic to Noh, so are there multiple styles of clowning. One that we hear relatively little about, despite its continued presence in popular culture (from the early films of John Waters, for example, and Cirque du Soleil), is the French bouffon tradition. This began, so it is said, when the deformed, insane, or simply very ugly were banished from society but allowed back into town on festivals solely to entertain.

Quasimodo, in Victor Hugo's Hunchback of Notre Dame, is the best-known bouffon character today, and Lynn Berg, one-third of the cast of Bouffon Glass Menajoree, wears a silly prosthetic hunchback in his role as Tom in this very funny parody of the Tennessee Williams classic. The original Glass Menagerie doesn't get too many serious professional productions – at least here in jaded New York – precisely because it's so well known and integrated into the artistic consciousness. But Williams's tale of a lame girl and her family's desperate hopes for a "gentleman caller" is as ripe for parody as his swampy settings are for decay and disaster, and this production takes the unicorn fully by the horn.

Playing well off Berg's manic Tom is the superb Audrey Crabtree, who reinterprets the repressed, shy Laura as a nightmarish figure in blood and white, half evil zombie and half Crazy Mary. Afflicted with a respiratory disease and a lame leg, Laura makes a perfect bouffon character to begin with, and Crabtree pounds the stuffing out of the character with insane glee. 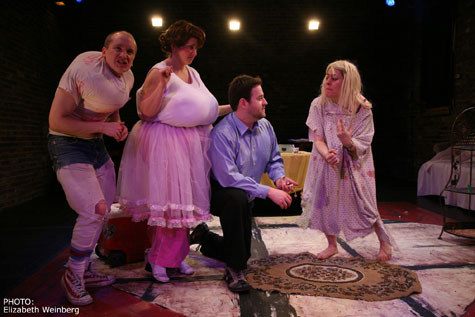 The third leg of the stool is Aimee German as Amanda, padded to giant size and obsessed with her own past as a magnet for gentleman callers. From the moment the three climb out of their box and begin spreading their net of horrendous dysfunction over the helpless audience, this excellent cast, directed by Eric Davis who clearly knows his clowning, has us in its loud, obscene power. It's grotesque in the original and best sense of the word.

Those familiar with the original play may be wondering: what of Jim, the gentleman caller who finally does pay a visit to shy Laura? Jim's still here – played by a member of the audience. This works quite well, and indeed there's a fair amount of audience participation throughout. But not to worry, there's no blue paint involved, and no real danger, just a thrilling whiff of it.