Though not long out of college, playwright Keith Boynton has a marvelously clever and pointed way with words. "Stoppardian" has become a cliché, but there is a pithiness and playfulness in his dialogue that suggests happy inspiration from the great wordsmiths of the modern stage. Boynton puts this facility in the service of two stories, on the surface quite different, but underneath betraying parallel narrative flow and concerns. The result is a resonant evening of theater, although the two approaches — one story quotidian, the other mythically grand — do not, ultimately, succeed equally well.

The first play, Walls, is a taut, tense, and funny two-character dramatization of what would seem a rather unremarkable situation. An old flame returns, complicating the life of a woman who is trying to get over her father's recent death by throwing herself into renovating his house. Carter (Mike LaVoie), the clean-cut interloper, hides his emotions behind a wit that's too ready for his own good, but as the dance of words progresses, we begin to see the fragile nobility that made Gail (Joan Kubicek) like him so much in the first place. With their sturdy, snappy performances these two robust actors fully inhabit the aggressive dialogue, compacting its larger-than-life directness and its writerly cleverness into refreshingly homey art. Thus the magic of theater. These two characters deserve each other — in a good way. Just the right length, the story ends with a satisfying punch. Directed fluidly by the author, the play is a small gem. 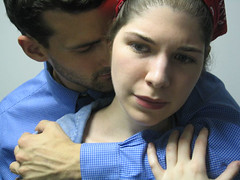 The second play, The Quotable Assassin, is a period drama in which the life of a condemned revolutionary, Simon (Boynton), is spared temporarily through the influence of Lucia (Roya Shanks), a popular novelist who wishes to base her latest work on his life. During a series of prison-cell interviews, defenses break down on both sides. Shanks is utterly convincing as the hyper-cultured, emotionally pent-up celebrity author who, Capote-like, bonds fatefully with her murderous subject. Her inner struggles play out in her every expression and gesture. She's an absolute joy. Boynton, however, makes his character rather too self-consciously charismatic, embracing his own elevated language so lovingly that, instead of living through the words, he turns speech into an end in itself. While this makes for an entertaining character, sometimes fascinating and always fun to watch and listen to, we don't see in his idealistic smartass the likeable side Lucia sees.

There's also a late plot twist that seems unnecessary and makes the play too long. Like the perfectly paced Walls, The Quotable Assassin is fundamentally a painfully human story of self-discovery that ends with a sad but hopeful departure. Unlike Walls, it suffers from overreach, outgrowing the confines of its one-act format. There's a wonderful, tight little play in it, but Boynton and the director (his mother, the cartoonist-writer-musician Sandra Boynton), haven't quite teased it out.

Nonetheless, this is a very worthwhile evening of theater, enlivened by inspired performances, sharp dialogue, and depth of thought.

Through Nov. 18 at Altered Stages in NYC. Tickets available at TheaterMania.