Ed, a deliciously creepy bolt of jealousy, lopes about his father's suburban kingdom like a modern Richard III.

Frederic Glover’s new play takes place in the present day. It hangs, however, not on the modern hooks of irony or experiment, but on the old-fashioned dramatic values of — wait for it — wait for it — Suspense.

Ed (Timothy Scott Harris) is a 39-year-old unemployed lawyer and smoldering misanthrope who’s moved back in with his philandering, law-professor father (Baz Snider) and the latter’s alluring, forty-ish new wife (Dee Dee Friedman). What’s the secret in Jenny’s past, and does she have hidden motives? Will Ed and Jenny’s flirtation turn into something more? Should Jenny believe the father, or the son, about her new family’s possibly dark history? Will the play obey Chekhov’s rule that if you hang a rifle on the wall in the first act, it must be fired later?

Most of all, the suspense lies in the psychology of the bitter, sarcastic Ed. Balding and round-shouldered, but physically intimidating and furiously lifting weights like the prison inmate he feels like, this deliciously creepy bolt of jealousy lopes about his father’s suburban kingdom like a modern Richard III. He wants his father’s big Westchester house, the girl, and the successful, settled life, but is his tragic flaw his jealousy, or is it the putative mental illness he may or may not have inherited from his mysteriously vanished mother? (Did she run off years ago, as Ed’s father, Mike, insists? Or is she in the urn on the mantelpiece?) 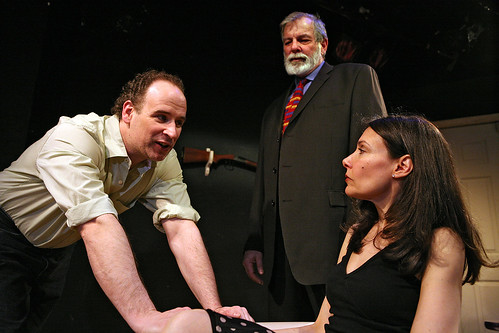 In the relatively straight role of the father, Snider conveys the fragility of modern enlightened manhood – cool cucumber outside, jalapeno of rage inside. The stolid academic with the radical past worries about his unstable son and is — at least academically — in touch with his feelings, but in the face of Oedipal confrontation, his self-awareness devolves to primitive anger and tyranny. In perhaps the most challenging role as Jenny, the fulcrum of the conflict, Friedman is subtly brilliant even, or especially, during her near-silent scenes, while the boys squabble over her loyalties. She does more with a tight nod or a sudden, leering smile than some might accomplish with extravagant speechifying.

In an inventive variation on in-the-round staging, director Kathleen Brant and scenic designer Tim Gobeliewski seat the audience on two opposite sides of a single wide set that efficiently represents the kitchen and living room. In this way they are able to suggest a spacious, comfortable house in a small off-off-Broadway space. As the actors enter and exit through and around the audience, the perspective shifts and the fourth wall is thinned but not eliminated. The resulting feeling of intimacy enhances the tension. Harris’s Ed is a rich, fascinating invention, a character that could become a classic. I even thought of John Malkovich as Pale in Burn This. With their more than able cast and crew, Glover and Brant have bred a big winner.

Through March 31 at the Workshop Theater in New York City. Call 212-695-4173 for reservations, or buy tickets online.