In a culture where entertainers are both royalty and psychic balm, actors' in-jokes are everyone's jokes.

How distant, really, is "classic" modern theater (Pirandello, Beckett, Stoppard) from vaudeville? In time, not so much. In theme – maybe not so much either. Isn't it all basically clowning? Who are Pirandello's six searching characters, who are Stoppard's Rosencrantz and Guildenstern, if not clowns? Aren't they all shadows of humans, seeking by means of antic dispositions a way through the wall? Pinocchios all, striving, or at least sighing, to be real people?

In Cycle, Rose Courtney's new, antic play with music, six dislocated vaudevillians need a muse so they can continue to exist. It's not clear how they choose (or conjure) her, but the exquisitely named Charlotte Shrubsole (played just as exquisitely by the playwright) has one frantic day to find the Secret of Success while bicycling through New York City. Scampering in and out of Charlotte's adventures, constantly thinking on their feet, the desperate vaudevillians take on various roles: voice coach, talent agent, audition buddy, blind date – trying to shepherd her towards Success, whatever that is. Less fixed characters than representative spirits loaded with character, the six attempt to keep Charlotte's eyes on the prize without exposing her to their separate world, which would be crossing a kind of fourth wall. 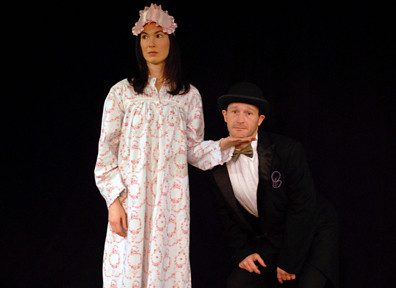 Rose Courtney and Michael Leydon Campbell in Cycle.
Photo credit: Martine Malle
The script is so picture-perfect and brightly executed, the music (by veteran accompanist and music director Rachel Kaufman) so seamlessly integrated, you don't even notice the play as a work of craft. The story's vagueness presents a small problem. But fortunately, in addition to limpid writing and joyous music, the production abounds in manic energy, precision staging (by director Craig Carlisle and choreographer Laura Sheehy), and on-stage talent.

Michael Leydon Campbell and J.T. Arbogast attack their array of parts with outsize glee, while Krista Braun wears commanding haughtiness like a young Glenn Close. Sarah Hund charms as violin-playing Fran and goes bigger-than-life as Charlotte's mother. Eric Zuckerman, as the troupe's Doubting Thomas, does nicely with relatively thankless roles, and the adorable Halley Zien manages with very few words to steal a few very funny scenes. The cast is as adept with quotations from Shakespeare, Chekhov, and medieval morality plays as they are with physical humor and the playwright's comic banter.

Centering the action, Ms. Courtney spices up her ingenue's wide-eyed intensity with a tiny dash of Sex and the City knowingness – just enough to make the character come alive without breaking the absurdist integrity of what is really a piece of meta-theater. It doesn't matter that the show is, on a literal level, one big actors' in-joke. In a culture where entertainers are both royalty and psychic balm, actors' in-jokes are everyone's jokes, just as Shakespeare's poetry and Chekhov's prose are everyone's music.