"If I could find another octopus in the tank...I would choose that over you."

Jon Sobel May 6, 2007 Comments Off on Theater Review: An Octopus Love Story 138 Views

Jane (Kelli Holsopple) is so insecure she leaves the lights on when she goes out "so everything's how I remember it when I get back." Desperate for assurance, she leads on a smitten male co-worker (Eric Kuehnemann) even though she has a live-in lover, the arrogant Tosh (Jenny Greer). Tosh is so controlling she won't even let Jane indulge her taste for guilty pleasure movies and comfort food. ("She caught me once, on a Cactus Flower and Tater Tot night.") Lacking confidence, Jane puts up with the emotional abuse.

Meanwhile, Danny (Josh Tyson), a sweet-natured, gauntly handsome waiter, has far too little ambition to satisfy his old friend Alex (Michael Cyril Creighton), who also happens to be Tosh's partner at a public relations firm. Danny toys with the idea of graduate school, without a clear idea of what he might want to study. But the two PR pros have cooked up a novel plan for the shiftless Jane and Danny, who have never met: have them get married while publicly avowing their homosexuality, thereby calling attention to the absurdity of laws that grant two opposite-sex strangers the benefits of marriage while denying the same benefits to a loving, committed same-sex couple.

If I were writing about a sitcom, the next sentence would naturally be: "Hilarity ensues." But playwright Delaney Britt Brewer has serious things to say here, though they're not the ones you might expect. Speckled with funny moments and clever dialogue, the play is fundamentally about how unexpected, and how unstorybooklike, love can be. With its topical plot, flawed and fully realized characters, and direction as smooth and transparent as glass, it is both timely and universal.

Unafraid of controversy, Brewer digs into the complexities of emotions and gay identity. As Jane and Danny develop mutual affection, Alex – whose own feelings for Danny may be deeper than he has let on – lashes out at his friend for betraying the cause. But how much is love responsible for the plan's backfiring, and how much is it Alex and Tosh's just desserts for manipulating their friends for a "higher" cause? Danny finds the guts to defend himself: "Don't try to stop it because it doesn't fit your image. That would be the ultimate malevolence."

Tosh, too, may have had a hidden motive for the arrangement, besides the political protest. Touting her Ivy League and Mensa credentials while committing malapropisms ("I'm glad you two have endeavored such a close friendship"), she proves in the end – as Danny tells a heartbroken Jane – "pathetic," if entertainingly so from our standpoint. 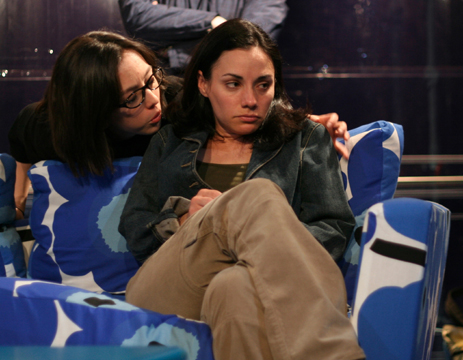 The central image that gives the play its name is emblematic of Brewer's ability to merge higher concepts with slightly elevated but believable dialogue. Jane tells Danny that, like the animal of the title, "I climbed out of the tank…to be with you," knowing it wasn't an environment she could live in. "If I could find another octopus in the tank…I would choose that over you." The flowering of Jane's courage, and to a lesser extent Danny's, forms the backbone of the story, and Holsopple's bravura performance locks it all together, with more than able counterbalance from Tyson and excellent performances from Creighton and Greer, both of whom make the most of their scenes.

The supporting cast also includes Krista Sutton as Jane's stepmother, a former beauty queen who reveals an unexpected richness of character while representing the essential goodness of the human heart, and Andrew Dawson as a creepy fundamentalist bigot who is nonetheless – like the play – disturbingly smart and human.

An Octopus Love Story is presented by Kids With Guns and runs through May 20 at the Center Stage Theater in New York City. Tickets at Smarttix or call 212-868-4444.