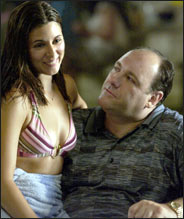 After watching faithfully, sometimes breathlessly, the first three seasons of The Sopranos, we took last year off for a variety of reasons: inconvenient airing times, sick of Tony, sick of the ultimate moral hole at the bottom of all these lives, the previews weren’t nearly as favorable as previous years. It’s time to return:

TV’s most acclaimed drama – and cable’s top series – returns to HBO Sunday (9 p.m. ET/PT) with 16 regular cast members, some in Tony’s real family, many in his Mob family, and a few in both. Some viewers love the show for its dry humor, others for its rich family drama, even though they may recoil at its profanity or escalating body count. “Yet there are people who complain it’s not enough, that they watch a Mob show because they want to see people get shot,” says creator David Chase.

….Life and death remain very much a part of The Sopranos’ fifth season. When we left both families (way back in December 2002) Uncle Junior escaped a jail sentence by jury tampering but was placed under house arrest; Christopher faced his demons, entering rehab to kick a heroin habit, and fiancee Adriana was coerced into snitching for the feds. Carmela tossed out philandering Tony after a bitter fight in Edie Falco’s third Emmy-winning performance.

The repercussions of each play out in the new season’s early episodes. “When everything kind of blows up at the end, it’s a pressure-cooker situation that she’s repressed for many years,” Falco says. “I don’t think she has a chance to figure out how this affects her.”

Tony, of course, is the center of the Sopranos’ orbit, the fulcrum of its stories, and increasingly he’s a tragic figure. “I find him a sad character in some ways, because there are some things he’s unable to see or unable to do anything about,” says Steve Buscemi, an occasional Sopranos director who this season joins the cast as a cousin also named Tony. “But I think he’s aware of his pain and frustration.”

….the overall emphasis shifts to the Mob “family” of Tony’s cronies: The season opens as a handful of ex-convicts, jailed in the 1980s’ RICO trials, are finally sprung, an idea sparked by a newspaper article. “The class of 2004 – old rats on a new ship,” Junior grumbles.

Many – including guests Robert Loggia, Frank Vincent and Frankie Valli – return to reclaim their slice of the action. But Buscemi’s Tony Blundetto wants to go straight.

The Mob boss begins to question the loyalty of his minions, trusting blood relatives most and upset that his newly freed cousin chooses massage therapy over massaging cash in a scheme to sell airbags from stolen cars.

….The Sopranos will be back for a sixth and final season, Chase says, mainly because he couldn’t wrap up story lines for all of its sprawling cast. But fans already used to Sopranos withdrawal symptoms will have to endure another long wait: The show won’t resume filming until next April, which means at earliest a fall 2005 debut. Chase has said the final season would replace a long-simmering Sopranos movie, but he’s willing to revisit that idea as a prequel to the series.

Chase has the series ending all figured out, but all he’ll say is the end closes a circle. “Tony will ruminate on some of his family history. There are things that were done early on, which I think as time goes by will be regretted, and cause other things to be done.”

Few will admit it, but among those whose characters remain alive, there’s keen interest in how they’ll end up. “We’ve thought about it,” says Michael Imperioli, who plays Christopher and wrote five of the show’s scripts. “Knowing David, I know it’s going to end tragically, and it should.” [USA today]

The NY Times has a preview today as well:

“The Sopranos” returns for a fifth season with all of its early verve and none of the torpor that weighed the show down last year. Its creator, David Chase, is cocky: the first episode posits a bear that wanders into the Sopranos’ backyard, terrifying A. J. and Carmela. The furry intrusion signals that things are about to get wild in this ruptured family, that the breakup has unleashed forces beyond their control. But it also contrasts rather comically with the ducks that so lyrically flew away from the Sopranos’ backyard pool in the first season, driving a bereft Tony into therapy.

Most of all, the bear is a rather crude reminder to viewers: “The Sopranos” is no ordinary television show.

But of course the pleasure of the series is that for all its subtleties and license with language, sex and violence, “The Sopranos” is a television drama, one that follows the basic formula even as it riffs. An intimate moment follows an action scene, a horrible act is leavened with comic relief. Devotees keep ramping up the comparisons to Shakespeare or Tolstoy. On “Star Trek,” the interpersonal strains on the U.S.S. Enterprise were pushed aside whenever a new planet came into view; on “The Sopranos,” the family melodrama never entirely eclipses the family business.

The crime series mostly stands apart by virtue of its knowingness – the series laughs at itself before anyone can take it too seriously. In the third episode of the new season, Uncle Junior, now almost senile, stares at the bald, bespectacled Larry David on the HBO comedy “Curb Your Enthusiasm” and thinks he is seeing himself. “Why am I on there?” he hollers at the set in pained confusion.

….Everyone’s loyalty is questionable, but no one is more torn than Adriana, the fiancee of Tony’s nephew Christopher. She was turned into an informant by the F.B.I. last season. One of the show’s most memorable moments came when Adriana was pressed into service at F.B.I. headquarters – she was so terrified she vomited all over the conference table. This season her guilt is so painful that at a cozy wine party with Carmela and other mob wives, she begins to blurt out a full confession. The tableau of the women’s faces, frozen between sisterly concern and feral wariness, holds her back but exposes everything about the tribal rules.

….Mr. Chase also seemed a bit inhibited by criticism of the show’s violence. The new season promises a full range of planned heists, revenge killings and routine extortion. But it is the random brutality – the Scorsese way – that is most telling.

In the first episode of the season, Paulie Walnuts and Christopher are in a restaurant parking lot, almost at blows over who should have picked up the tab. (In mob etiquette, the youngest pay for their elders, as a “sign of respect.”) When the waiter comes out to complain about his paltry tip, Christopher throws a brick at the back of his head and triggers what looks like an epileptic fit. Paulie whips out a gun and shoots the waiter dead – an impulse killing that later brings about a tender reconciliation.

“I’m sorry, Paulie,” Christopher mumbles into his car phone. Paulie replies, “I apologize, too, kid.” Audience complicity is at the root of “The Sopranos.” Either despite the vicious, senseless murder or because of it, viewers cannot help misting up a little as the two thugs make up.

Theater Review: Tonya Pinkins in ‘The School for Wives’ – Livestream from Molière in the Park