The Month of Halloween

“Halloween” is a month now – haven’t you seen it on your calendar?

It begins the weekend before October 1 and runs until, um, Halloween, October 31. The orangy month of Halloween, with its haunted houses, spooky decorations, pumpkin carving, scary movies, TV specials, costume parties, and finally, trick-or-treating, is now the second longest of all months, just behind “The Holidays,” which begins the day after Thanksgiving (November 24 this year) and runs through the first work day after January 1, which, sadly, this year is January 2.

A fascinating Darwinian-cultural-marketing development has been bubbling under the surface for decades, but now is being made explicit: a squeeze play of sorts where homey, quiet, introverted, autumnal Thanksgiving — a holiday whose commercial prospects reach no further than a nice family meal — is caught between the bold, brassy, extroverted, extravagant, wildly commercial bookends of Halloween — now a $3.3 billion industry — and Christmas.

It is no coincidence the Holiday Shopping Season officially begins the day AFTER Thanksgiving, reserving a respectful and decorous tone for a Thursday of contemplative, familial gratitude before we bust loose the mad whirlwind of consumerist frenzy that heralds the onslaught of The Holidays. 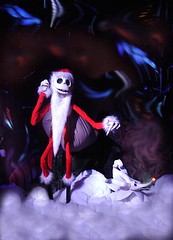 The Halloween-Christmas, yin-yang, darkness-light, antimatter-matter, death-birth, spirit-flesh tandem is so holistic, so complementary, each in its own right so forcefully THERE, so articulate in its branding, that poor soft Thanksgiving has become little more — culturally anyway — than a brief caesura between them. 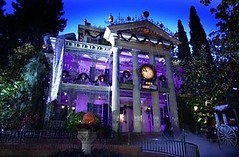 The first real tangible expression of the Halloween-Christmas confluence was the creepy, touching, imaginatively stylized stop-action animated ’93 film Tim Burton’s Nightmare Before Christmas, a continuation and blooming of Burton’s fascination with twisting the macabre back on itself (Frankenweenie, Beetlejuice, Edward Scissorhands) and letting the sparks fly in unexpected directions.

In Nightmare, Jack Skellington, the spider-limbed Pumpkin King of Halloweentown, happens upon Christmastown, becomes transfixed then obsessed, and tries to fit the square peg of Halloween into the round hole of Christmas, generating mirthy mayhem and holiday transmigration. And this was a Disney film. 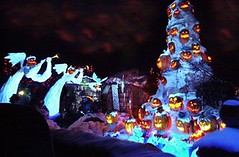 The Disney people, never ones to miss a synergistic marketing opportunity, had a lightbulb insight several years ago when they realized they already had a perfect vehicle for sparking the relatively slow theme park season between summer and The Holidays by outfitting the beloved Haunted Mansion attraction of Disneyland Nightmare Before Christmas-style, resulting in three full months of festive holiday miscegenation.

“Haunted Mansion Holiday” shows what happens when “the traditions of Halloween and Christmas collide,” depicting a Holiday Season “as taken over by Jack Skellington and his friends from Halloweentown.”

Incidentally, Haunted Holiday Mansion is a cornerstone of the SoCal resort’s first ever Halloween makeover, “HalloweenTime,” running today through Halloween, involving redecorating the park with over 300 jack-o-lanterns, orange and yellow bunting, putting costumes on the Disney characters — costumes on costumes, as it were — offering festive food items in restaurants, special merchandise in stores, and crafts and activites for the kiddies.

So back to the month of Halloween: I don’t see it extending back much farther into September, which carries in it the dying embers of summer, which we in the seasonal climes are very reluctant to surrender hastily. And Halloween itself seems a pretty sturdy barrier for the spook themes, although the autumnal/harvest aspects certainly carry on until Thanksgiving, the little buffer holiday.

I think we will see more exploration of the Halloween/Christmas nexus – Disney, via the imagination of Tim Burton, has led the way.