Today the Supreme Court ruled that Ms. Smith, 38, has legal footing in her battle to win a portion of her late husband's $1.6 billion estate – the justices said that the 9th U.S. Circuit Court of Appeals was wrong in ruling that federal courts could not handle Smith's case.

In what has to be one of the tawdriest legal battles argued before the highest court in the land, the Supremes did Family Feud Anna Nicole-style back in late February when they heard her case, which rested on the narrow issue of whether a federal court could intervene in a state probate case.

Smith, dressed in demure mourning black, wept in the courtroom as justices spiritedly discussed the late billionaire, J. Howard Marshall II, and whether he had intended to provide for his young wife in death. When Smith arrived at the court, several photographers were kno 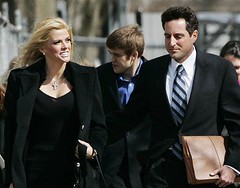 cked to the ground in a scuffle to photograph her.

Smith has been battling her former "stepson" Pierce Marshall since almost before the body in question was even cold. The case is legendary for the immense greed on all sides and the overall ickiness of a then 26-year old Playmate providing comforts to a fading octag 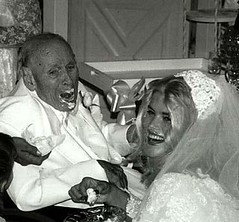 Justice Ruth Bader Ginsburg's opinion includes a hint of the nastiness of the case, referring to accusations that Pierce Marshall "engaged in forgery, fraud, and overreaching to gain control of his father's assets"; and, on the othe 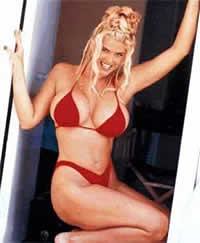 r side, that Smith had "defamed" her former stepson. 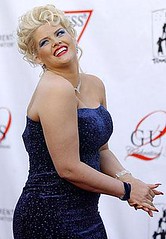 Only in America can a woman like Anna Nicole Smith gain fame and fortune despite having no discernible skills, talents or abilities. She has parlayed her vacuous blonde stupidity and huge set of cans into the plushest of lifestyles.

You go for those millions, Anna Nicole – you've earned them.