It's as if the authors of a groundbreaking new study on celebrity narcissism, USC's Drew Pinsky and S. Mark Young, had commanded a real life demonstration to coincide with the release of their findings: celebrities are notably more prone to admiring themselves than the average Dick and Jane, women celebrities even more so, and reality TV personalities are the most monumentally self-regarding subgroup studied.

What else would it be called?

She later glided in style to a Hollywood charity bash hosted by Dave Navarro in her Mercedes-Benz SLR McLaren, hobnobbed there with her glittering peers, had — she claims — "one margarita," went to maybe another party and/or a club, then sped off into the night to find burger sustenance.

Hilton was arrested by Los Angeles police in Hollywood early Thursday on suspicion of driving under the influence after officers observed her "driving erratically." 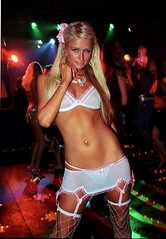 "It was nothing," she assured Ryan Seacrest on his Thursday morning radio show on KIIS-FM, Los Angeles, a few hours after her arrest. "I was just really hungry and I wanted to have an In-N-Out burger," so maybe she was "speeding a little bit," admitted Hilton, who last year writhed her way through a salacious TV commercial for Carl's Jr.

"There was a lot of paparazzi around so I think they were trying to make a statement," Hilton continued. "Everything I do is blown out of proportion and it really hurts my feelings." But she also said the arresting officers were "really nice."

She did not acknowledge the danger she put herself and the public in by driving under the influence, nor did she apologize for it. Hilton's publicist Elliot Mintz continued the minimization theme. "She's absolutely fine," Mintz said. "She didn't appear in the least bit to be intoxicated." The DUI was "probably the result of an empty stomach and working all day and being fatigued," he said. She had, he added, "the absolute minimum amount of alcohol in your system that would justify an arrest," which in California is 0.08 percent.

Regarding the study, "Narcissists generally crave attention, are overconfident of their abilities, lack empathy and can evince erratic behavior," noted Pinsky, an assistant clinical professor of psychiatry at USC but better know as "Dr. Drew," host of the nationally syndicated Westwood One radio advice show Loveline for the last 20 years. "However, they are also well-liked, especially on first meeting, are extroverted and perform well in public."

For their study — the term "narcissism" derives from the Greek myth of Narcissus, who fell in love with his own reflection — Pinsky and Young asked 200 guest celebrities on Loveline — of which Paris Hilton was apparently not one — to anonymously complete the standard Narcissism Personality Inventory profile, which measures "authority," "exhibitionism," "superiority," "entitlement," "exploitativeness,"
"self-sufficiency," and "vanity" as components of narcissism. 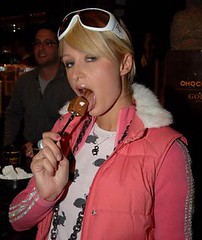 While an earlier study found a base test score of 15.3 for the adult population of the U.S., Pinsky and Young found a celebrity average NPI score of 17.84 in their survey, and a whopping 19.2 score for female celebrities, driven by notably higher results for "exhibitionism," "superiority," and "vanity."

"The industry attracts and retains women who place a very strong emphasis on their physical appearance," the authors conclude. And for reality TV personalities, who scored 19.45 on the NPI, Pinsky and Young say, "Reality television has provided an outlet for narcissistic individuals, many with limited abilities, to believe that they can succeed in the entertainment industry."

Pile all that on top of the sense of "entitlement" and "exploitativeness" you have ingrained into a fabulously wealthy party girl heiress, and you have a veritable poster child for towering, gilded narcissism.

"Knowing that many celebrities have narcissistic tendencies may allow entertainment industry decision makers such as studio executives, producers, directors, agents, publicists and casting agents to work with them more effectively," Young explained. "It may also provide greater insight into celebrity behavior for the general public."

Messrs. Pinsky and Young thank you for your kind assistance, Miss Hilton.

Netflix’s new film 'I Care A Lot' is about the worst nightmare that could happen to vulnerable senior citizens.