Our Time Theatre Company provides an artistic home for kids and teens who stutter.

Stars Honor Bill Withers and Our Time, an Artistic Home for People Who Stutter

Jon Sobel April 15, 2008 Comments Off on Stars Honor Bill Withers and Our Time, an Artistic Home for People Who Stutter 43 Views

Possibly the most inspiring course I took in college was a study of W. B. Yeats. The professor, Jack Kelleher, was knowledgeable, but more important, he was passionate about the subject. But he had a severe stutter, and sometimes sitting in class listening to him lecture was a painful thing.

Professor Kelleher's stutter vanished when he recited the poetry. He even sang for us once or twice (some of Yeats's verse was written to go with traditional melodies). 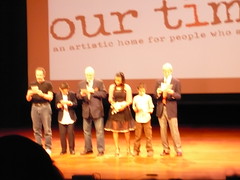 Reciting and singing he had no trace of a speech impediment. Later I learned that many stutterers don't stutter when they sing.

Last night's star-studded Our Time gala honoring Bill Withers brought this, and many other lessons about stutterers, home to a big happy audience of family, friends, and donors.  Our Time Theatre Company is a performing arts organization for kids who stutter. Most of us at some point in our lives have met someone who stutters, but stuttering kids who don't get emotional support often shut down and stay quiet, so we might not know when we see them. An estimated one percent of the population stutters.

Bill Withers is famous for his hits: "Lean On Me," "Ain't No Sunshine," "Lovely Day," "Use Me," and more. It turns out he also stuttered badly as a youngster. A lot of entertainment royalty turned out to honor him and to celebrate the achievements of Our Time. Providing "an artistic home for people who stutter," the organization has enabled and inspired many a kid to literally find their voices.

Some of the kids who took the stage to speak, emcee, recite, sing, or rap had mostly overcome 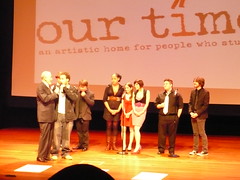 their stutters, but many had not. Some had been in the Our Time program for years, but Our Time is not a therapist. To the contrary, it's a place where stutterers are given all the time they need to express their thoughts – hence the name "Our Time."  No one will interrupt them, finish their sentences, make fun of them, or assume they're stupid because they're slow to speak.

The love and energy on the stage proved what a good cause it was. The gala raised well over $200,000 for the organization. A whole bevy of stars took the stage together with the Our Time kids, performing songs of Bill Withers (who made a grand speech towards the end) along with songs and poems written by the kids. Rosie Perez, Ed Sherrin, Sam Waterston, Jesse L. Martin, Mandy Patinkin, Lauren Ambrose, Daryl Hall, Daphne Rubin-Vega, cast members from Spring Awakening, and other notables made appearances.

With all that, the most affecting thing was a rather humble and quiet speech made by a teenager named Andre Gillyard, who told a story – 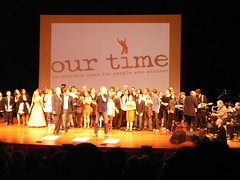 echoed by Bill Withers himself – of giving up, shutting down, just figuring he'd never amount to anything – and then having a fateful moment of discovery.

For Gillyard, it was seeing something in the newspaper about Our Time, which has been active for seven years now. For Withers, many years earlier, it was meeting a local shopkeeper who simply showed patience and compassion. But look at that simple noun in the first sentence of the previous paragraph: "speech." Mr. Gillyard, a teenager with a still distinct stutter, made a moving and extremely well-written speech any high school valedictorian would have been proud of. He made a speech. We listened, we heard, we cheered. What more needs to be said?