What a striking coincidence that two of the most high profile supernatural fantasy shows on TV — ageless Supernatural, now in its eleventh season on The CW, and Preacher, just launched on AMC — revolve around the search for an absentee God. Some of the most profound theological and philosophical questions are being treated matter-of-factly and compellingly on pop TV. What is God’s active role in relation to mankind? To his Creation in general? Does God have a personality? Characteristics? Is he still the vengeful Old Testament God, or has He changed into the New Testament God of mercy?

What a striking coincidence that two of the most high profile supernatural fantasy shows on TV — ageless Supernatural, now in its eleventh season on The CW, and Preacher, just launched on AMC — revolve around the search for an absentee God. Some of the most profound theological and philosophical questions are being treated matter-of-factly and compellingly on pop TV. What is God’s active role in relation to mankind? To his Creation in general? Does God have a personality? Characteristics? Is he still the vengeful Old Testament God, or has He changed into the New Testament God of mercy? 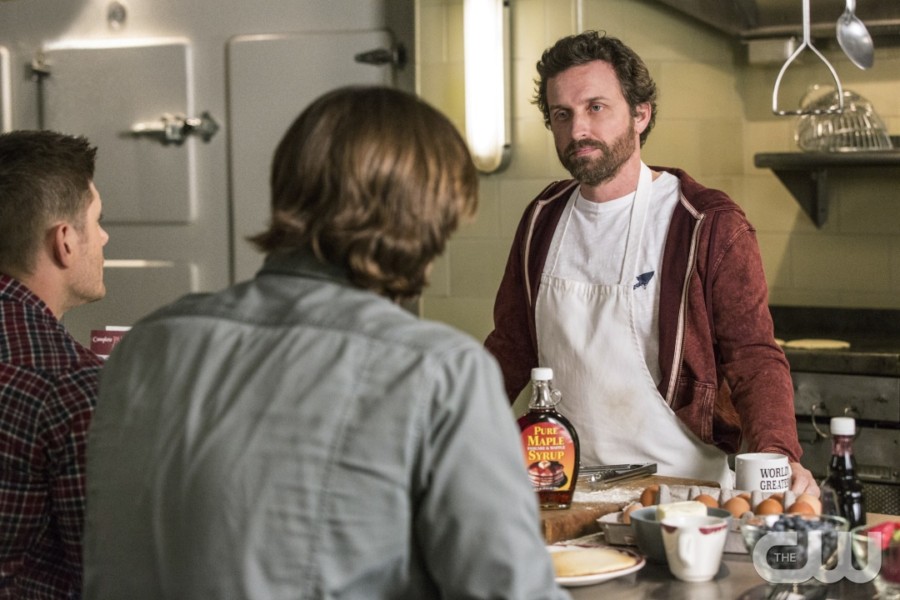 The casually audacious Supernatural, confident in its wildly devoted fan base and always willing to play with TV format and story convention, has tracked the momentous consequences of a missing, silent God for several seasons now. The power vacuum has resulted in internecine wars in heaven and hell, intrigue and palace coups, and bizarre alliances between angelic and demonic beings. While this may all sound dangerously blasphemous, Supernatural’s approach is so guileless and devoid of religious subtext that we are able to see these nominally Judeo-Christian characters — angels and archangels, demons, Lucifer, and now a personified God himself — as comprehensible, individualized beings with specific motives, obsessions, and flaws very much like the figures in Greek and Roman myth.

This outstanding eleventh season of Supernatural has seen the liberation of Dean Winchester from under the oppressive yoke of the Mark of Cain, resulting in the catastrophic release of The Darkness, an archetypal force of destruction personified by the beautiful, emotionally vulnerable, apocalyptically vengeful Amara. Amara is also, incidentally, the sister of God, and has a fearsome crush on Dean.

In a shocking, clever, and somehow completely fitting twist, God has reappeared this season after a very long silence in the person of shlubby author Chuck, whom we had seen previously as the author of the Supernatural saga, which Sam and Dean Winchester are living out. Very very meta. But back to God/Chuck. He has very personal family issues with His sister Amara, the essence of entropy and destruction vs his embodiment of creation; and with his favorite son Lucifer, with whom He has funny, touching, complicated father/son issues. What’s fascinating is that the Christian Fundamentalist Right, so quick to take offense at minor slights, has barely taken notice of this anthropomorphism, perhaps because Jesus has thus far been (very wisely) left out of the equation.

The season is ending with an epic battle between God, Lucifer, Crowley, Crowley’s mother Rowena, various witches, assorted demons and angels, and the Winchesters all amassed on one side, against Amara on the other. 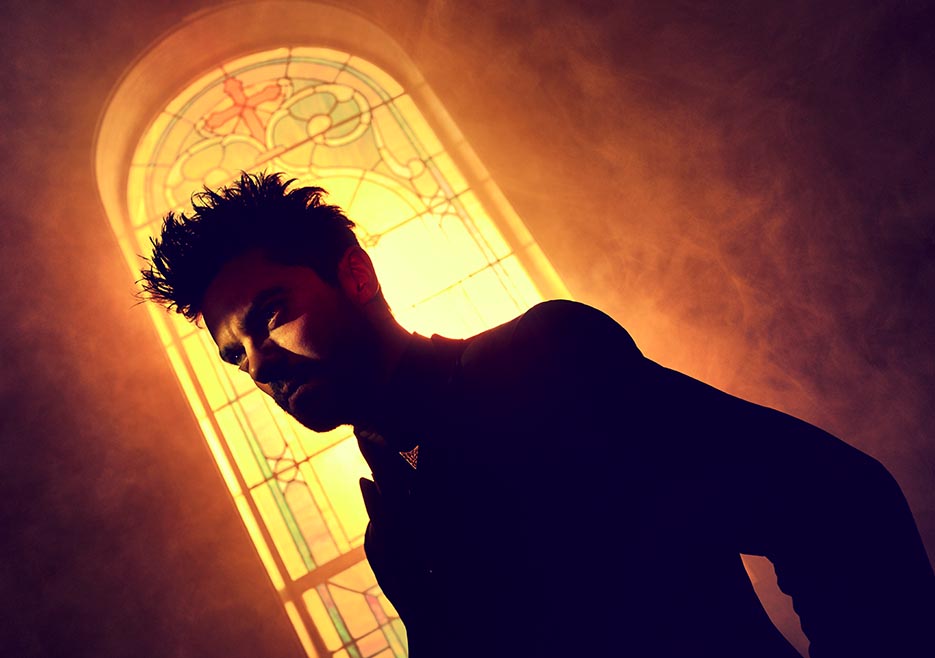 While Preacher is brand new to TV, the characters, story and milieu date back to the very popular and influential Vertigo comic series run between 1995-2000, written by Garth Ennis and Steve Dillon. In the TV series, which debuted last night on AMC with an action-packed, peripatetic 90 minute pilot, a preacher (Dominic Cooper) with a dark past and an iffy present, who attends to a small, peculiar flock at a hardscrabble West Texas prairie church, is having a crisis of faith. God has been strangely silent. He seems to be missing. 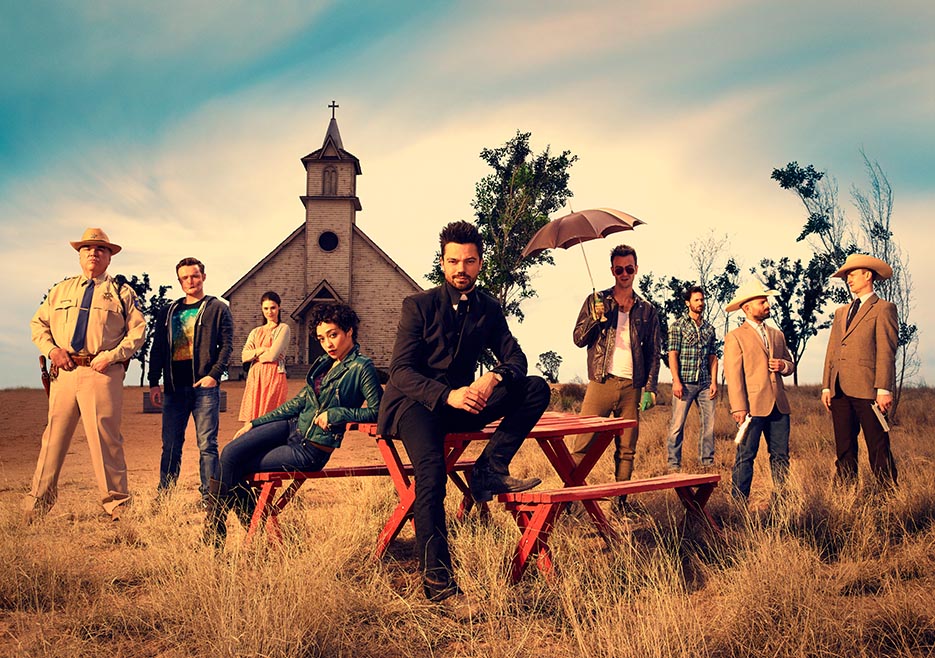 Toward the end of the pilot, which has the production values and acting chops of a Hollywood studio film, the preacher, Jesse Custer by name, asks God for forgiveness and for a sign of recognition. Should he carry on as a preacher? He feels like a fraud. In flashbacks we have seen the child Jesse make a promise to his preacher father to carry on and fight the good fight just before his father is murdered, a promise he takes very seriously. So he is torn.

Receiving no immediate response from God, the preacher mumbles, “Well, F-you, too.” Just then, a nearly invisible globular entity or force field of some sort, blows open the church doors, displaces pews as it moves down the center aisle toward the Preacher, stops just in front of him, then tosses him through the air backwards, slamming him against the rear wall of the church.

Was it God? Doesn’t seem like it. The Preacher wakes up three days later on Sunday morning with a weird buzzing in his ear and new powers of persuasion (or something) beyond the mad fighting skills we have already seen demonstrated. He also decides he isn’t going to quit, is going to soldier on and recommit to the cause, which remains vague.

Just to top off the current spate of commercial TV God-angst, the Fox show Lucifer, which recently wrapped its first season, also paints God in a questionable light, as we see the relationship between He and Lucifer from the latter’s point of view. Lucifer does not see himself as evil, nor is he interested in running Hell anymore. He sees himself as a force for justice, and that’s why he is so keen on being a detective.

Sometimes the thorniest issues are more easily approached obliquely, and profound truths, or at least questions can be addressed via pop culture. We’re seeing that right now.

(images courtesy AMC and The CW)

Remote Learning – The Good, The Bad, and the Ugly

Humans 2.0 is the second season of the AMC-Channel 4 co-production of complex, thought-provoking sci-fi on the subject of artificial intelligence.