As I was driving my mother-in-law to the airport this afternoon we were having our usual low-intensity disagreements about politics, war, the media, whether or not Diane Rehm and her voice like a 110-year-old tracheotomy victim should remain on the air, and we did agree that while there is a vast amount of information out there – more than ever before via the Internet, cable TV, satellite radio, satellite radio, etc. – unless one makes a specific effort to seek out diverse viewpoints, one is likely to fall into a comfort zone where one’s preconceptions are reinforced rather than challeneged or broadened. And we also agreed that the quality of news from the major outlets like network TV (and their local affiliates), commerical radio, and major newspapers has deteriorated markedly.

Most U.S. news media are experiencing a steady decline in their audiences and are significantly cutting their investment in staff and resources, according to a report issued on Monday.

The study on the state of the U.S. news media by the Project for Excellence in Journalism, which is affiliated with Columbia University’s graduate journalism school, found only ethnic, alternative and online media were flourishing.

On the positive side, Spanish-language newspaper circulation nearly quadrupled over the past 13 years and advertising revenues were up sevenfold.

The report cataloged a striking decline in the number of journalists employed in American newsrooms. There were one third fewer network correspondents than in 1985; 2,200 fewer people at newspapers than in 1990; and the number of full-time radio newsroom employees fell by 44 percent from 1994 to 2001.

Only 5 percent of stories on cable news contained new information, the report found. Most were simply rehashes of the same facts. There was also less fact checking than in the past and less policing of journalistic standards.

Quality news and information were more available than ever before, but so was the trivial, the one-sided and the false.

Consumers with the time and patience to distinguish between many different sources of news might be better informed, but many were likely to find news outlets that echoed their own view of the world without providing alternative viewpoints. [Reuters]

The larger trends we see in the data on content, audience, economics, ownership, and newsroom investment all could add to public distrust of the news media. There is something, in other words, of a vicious cycle in the public attitude data. As declining audience leads to newsroom cutbacks and other financial fixes, these reinforce the public’s suspicions that news organizations are motivated more by economics than public service.

These steps seem to address the problem, at least in small ways, that newsrooms can control. Yet they have not shown up in the numbers. Indeed, there is only one up-tick in the last 18 years in the general approval or attitudes toward the news media, in the survey data. That came in November 2001, after the terrorist attacks. The only measurable differences in press performance during that period were these: the press had suddenly become far more serious in what it covered, and more factual and less interpretative in the way it covered it; the media suddenly devoted enormous resources to covering a story of paramount importance even if it cost them money; as a nation we faced a crisis that made the need for journalism more urgent.

Those changes in news agenda, though, were not sustained. Within a few months, as the urgency of events subsided, studies found virtually no difference in the local news agenda and only a partial change in the agenda of nightly network news than before September 11. And by August 2002, Pew Center Surveys found the rise in trust to have fallen back.

It is possible that the public is simply of two minds. It wants a more entertainment-infused, more sensationalized, more interpretative style of news, and the media have given it to them. The public then feels repulsed and derides the messenger for delivering it.

It is also possible that this declining trust has only a little to do with the press, that these attitudes toward the news media are only a reflection of a declining trust in all institutions.

Brushing off these issues as a sign of public hypocrisy or general skepticism, however, seems too glib. The public attitudes aside, something is changing in the news media. Faced with declining audiences, many major news institutions have changed their product in a way that costs less to produce while still attracting an audience. The public senses this and says it doesn’t like it.

Blaming the news media for these changes is too easy. Journalism faces more difficult economic circumstances than it once did. Yet the way the news industry responded has helped erode public trust. How long can the profession of journalism endure if people increasingly don’t believe it? To reverse the slide in audience and trust will probably take a major change in press behavior, one that will make the news more relevant and customizable and at the same time suggest to the public, as it did briefly after September 11, that the news industry is more concerned with the public good than Americans suspect.

The entire report is here.

A different kind of report – this one on books – revealed some parallel themes:

Bush at War” and “Sleeping With the Devil” are just two of the political books that have dominated the best-seller list of The New York Times in recent months. But according to Valdis Krebs, a social-network analyst in Cleveland, these volumes – the first a blow-by-blow account of White House deliberations in the aftermath of Sept. 11, the second an exposé of corruption and hypocrisy in American-Saudi relations – share an unusual distinction. They occupy a sparsely populated middle ground, rare titles that have been bought by people who generally tend to shop for much more partisan polemics.

….Curious to learn something about consumers of political titles in a tense election year, in January he analyzed purchase patterns for such books, using the Times’s list and the Internet. First, he plugged titles from the list of The Times into Amazon.com and Barnes &Noble.com. Then, thanks to a “customers who bought this book also bought” feature on the Web sites, he was able to determine what other titles buyers had purchased at the same time. Following the links between titles, Mr. Krebs ended up with a list of 66 books.

His map showing how the titles are connected by buyers reveals a readership — or at least a book buyership – as fiercely polarized as the national electorate is said to be. On the left is a cluster of several dozen liberal polemics (the blue nodes) linked by a dense thicket of crisscrossing gray lines. On the right is a nearly identical cluster of conservative tracts (the red nodes). Connecting the blue and red sides of the map are just a few gray lines and gray nodes, all politically moderate or nonpartisan titles, including “Sleeping With the Devil” by Robert Baer, “Bush at War” by Bob Woodward and “All the Shah’s Men” by Stephen Kinzer, a cultural correspondent for The New York Times.

Mr. Krebs, who got similar results when he conducted the same experiment last year, calls this pattern the “echo chamber” effect: for the most part, he found, buyers of liberal books buy only other liberal books, while buyers of conservative books buy only other conservative books. This finding appears to buttress the argument made by Cass Sunstein, a law professor at the University of Chicago, in his influential study “Republic.com” (Princeton University Press, 2001) that contemporary media and the Internet have abetted a culture of polarization, in which people primarily seek out points of view to which they already subscribe. [NY Times] 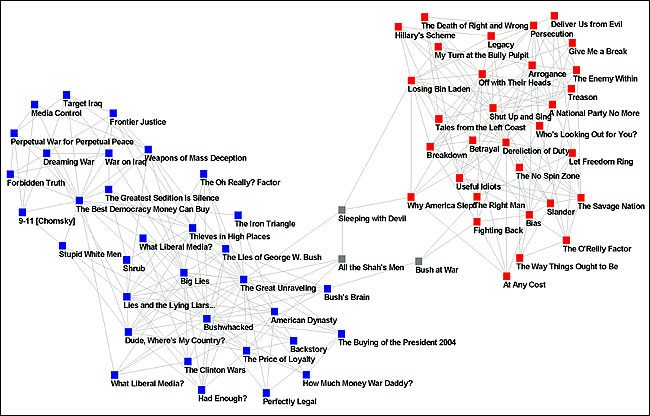 So what does this mean? It means that as the media becomes more and more fragmented and focused on specific constituencies, there is less and less feeling of responsibility to find common ground, to attempt to show conflicting views of a story or situation. As the mainstream media sees its audience continue to shrink, it resorts to increased sensationalism to spike its audience while it cuts back on costs, namely reporters and first-hand news gatherers, further losing the trust and confidence of its customers in a vicious cycle. From a consumer standpoint, the more choices we have, the more we seem to be drawn to perspectives that correspond to our own, that reinforce rather than challenge or broaden.

All of this is why I – in a completely self-serving manner – believe that outlets like Blogcritics.org, that have an extremely wide variety of opinions in one place, and where those opinions have to justify themselves against each other and all comers, do serve a valuable and unique service. Yeay.