Pedophiles R Us: King Released From Prison in U.K.

Other than the enticing mid-’60s orchestral pop tune “Everyone’s Gone to the Moon,” I was barely aware of Jonathan King, who is something of a legend in U.K. music as a performer, producer, songwriter, TV presenter, record executive, and pop music columnist – a legend and a convicted pedophile.

He was released from prison today after serving half of a seven-year term for “four indecent assaults and two serious sexual offences” on boys aged 14 and 15, committed in the ’80s. 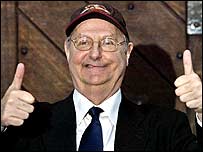 The 60 year-old seemed to quite enjoy himself in prison. “I’ve had a brilliant three-and-a-half years for crimes I did not commit,” he announced to the BBC

“You meet fascinating people and get to see the other side of the world, one that you never knew existed. Like most people, I had the view that once the prison gate slams shut, hell takes place, but the reality couldn’t be further from the truth. I have had no complaints at all about my time inside, apart from the food at Broadmoor.”

Sounds like they let him out early because he was enjoying himself too much.

King will be banned from working with children and may not “receive visits” from anyone under 18 without police permission.

But what interests me are the similarities to another case currently underway in the U.S. – note what the judge said upon King’s conviction in ’01: “This was a serious breach of trust. You used your fame and success to attract adolescent and impressionable boys.”

The prosecutor said, “What he really gave them was his company, the company and interest of a celebrity. It is not hard to imagine how these young men would have felt flattered and excited by the attention of such a person.”

King often “befriended” teenage boys on the streets of London, offering them rides in his Rolls Royce and luring them back to his home, where he showed them pictures of naked women and molested them. He reportedly gave them signed t-shirts and records after attacks, and “assiduously maintained good relations with the teenagers’ parents,” who were often wowed by King’s star power.