The Maya tongue, that is. Also, NASA uncovers Maya ruins from space, and I speak with a Maya freak about his obsession.

Ever idiosyncratic, Mel Gibson will appear briefly in tonight’s Oscar ceremonies speaking a language not typically heard in such settings: ancient Maya.

Gibson, 50, is currently filming Apocalypto — an adventure epic set in ancient Mayan Mexico — on the edge of southern Mexico’s rainforests in the state of Veracruz. All the dialogue in the film is spoken in Maya. “I wanted to shake up the stale action-adventure genre,” Gibson told Time magazine. “So I think we almost had to come up with something utterly different like this.”

The film, which Gibson co-wrote with first-time screenwriter Farhad Safinia, is hthe first he has directed since the wildly successful and controversial The Passion of the Christ (which was performed in Latin and Aramaic), and is, according to Time, an “allegory about the collapse of civilizations, with warnings about environmental abuse and political fear-mongering.”

The Maya have been rocking the new of late. Just last month NASA scientists announced they are using space- and aircraft-based “remote-sensing” technology to uncover Maya ruins not recognized in over 1,000 years using the chemical signature of the civilization’s building materials. 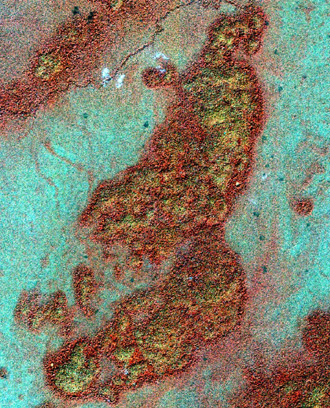 “From the air, everything but the tops of very few surviving pyramids are hidden by the tree canopy,” said NASA archaeologist Tom Sever, a pioneer in the use of aerospace remote-sensing for archaeology. “On the ground, the 60- to 100-foot trees and dense undergrowth can obscure objects as close as 10 feet away. Explorers can stumble right through an ancient city that once housed thousands and never even realize it.”

Sever’s team discovered a correlation between the color and reflectivity of the vegetation seen in the images and the location of known archaeological sites. In 2004 they hiked deep into the jungle to locations guided by the satellite images, and uncovered a series of Maya settlements exactly where the technology had predicted they would be found. Images have now helped the team survey an uncharted region around San Bartolo, Guatemala.

What caused the “signature” discoloration? The Maya built their cities and towns with excavated limestone and lime plasters, and as their structures crumbled the lack of moisture and nutritional elements inside the ruins suppressed some plant species, and discolored or completely killed off others as disintegrating plaster changed the chemical content of the soil around each structure.

“Over the centuries, the changes became dramatic,” said team member William Saturno, an archaeologist at the University of New Hampshire in Durham. “This pattern of small details, impossible to see from the forest floor or low-altitude planes, turned out to be a virtual roadmap to ancient Maya sites when seen from space.”

For some context, I spoke with Peter Dunham, an archaeologist at Cleveland State University specializing in the Maya, about the ancient civilization.

Eric Olsen – What interests you about the Maya?

Peter Dunham – I think we identify with them. They had all the complex features that we do: a remarkable system of mathematics, they invented their own writing system. Remember, we didn’t – we borrowed ours. They had absolutely fantastic astronomical knowledge, terribly accomplished architects. They were very, very talented artists and sculptors.

They managed to build this remarkable civilization in the middle of a tropical rain forest: precisely the environment that most successfully resists our inroads today. There are huge areas of Belize that I work in that are full of ancient ruins and not one modern human being because we haven’t really figured out how to sustain our civilization in that environment, but they did.

EO – Since 1992, Dr. Dunham has led an archaeological project in Belize, on the Yucatan Peninsula just below Mexico. What’s it like working there?

PD – Basically, what you have there are canyons in the jungle. You also have sheer towers of stone, so the environment is really a glorious one. It’s also for those very reasons, however, a very challenging one. It’s very hot, very humid. When you get into these canyons there’s no breeze whatsoever, and you have to carry a pack full of your gear, and it gives you a real sense of the terrain. Along one of the rivers, this one river in particular is one of the most beautiful hikes I’ve ever seen anywhere: the water is sort of like liquid turquoise.

EO – The Mayas thrived in the rain forest of Central America, but after peaking between 600 and 800 AD, their civilization declined alarmingly. What happened?

PD – Many of us labor under the misassumption that the Maya disappeared – they didn’t. There are still several million Maya people today who take exception to the idea that they disappeared, but they certainly underwent a significant transformation in the century between 800 and 900-or-so AD. And, I think one of the things that draws many of us to the Maya is just that: because if we identify with them as being like ourselves and they experienced this dramatic and traumatic decline, then doesn’t that mean that we too ourselves could face something like that? And the answer to that question is “yes.” The rules of civilization are the same no matter where or when you play the game.

EO – Through the work of archaeologists, including Peter Dunham, we have learned that a multitude of factors piled up on the Maya until their civilization could bear the weight no more, including environmental degradation caused by overfarming and overpopulation, climate change, drought, malnutrition and disease, and the inability of the political, social, and belief systems to deal with these problems.

PD – We have the good fortune that we actually recognize these issues and we have sciences devoted to trying to address them. This happened so quickly to the Maya that I’m not quite sure they recognized what the problems were, let alone figure out how to resolve them.