It’s all fun and games until you tear the labrum in both your hips.

In the middle of a bizarrely successful year for 60-year-old Barry Manilow — first number one album in almost 30 years, deluxe reissues of his ’70s catalog, smoking hot run of his Manilow: Music and Passion show in Vegas, smash DVD, Emmy nomination — the mop-topped king of Adult Contemporary singer-songwriters announced yesterday he will have arthroscopic surgery to repair torn cartilage on both of his hips in late August.

The earnest blond schlub from Brooklyn, who broke into showbiz writing and singing jingles for Dr. Pepper, Pepsi, State Farm Insurance, and McDonald’s (“You Deserve a Break Today”), will take just such a break from his four-year run at the Las Vegas Hilton to have outpatient surgery at a Southern California hospital after the August 27 Emmy Awards. Manilow is nominated for Best Performance in a Variety or Music program for the PBS special of his Music and Passion show, and will be among the performers for a special tribute to Dick Clark.

Recovery from the surgery will take about eight weeks and the entertainer will miss 16 Hilton performances between August 30 and October 7 that will be rescheduled for 2007. “I’m anxious to make it through the Emmy Awards and then right to the hospital,” Manilow said in an announcement. “The doctors have promised me that I’ll come back even better than before. And I can’t wait to hit the stage again.”

Apparently, “hitting the stage” was a significant part of the problem as Manilow’s “high energy” and elaborately produced stage show exacerbated damage to aging swivels originally injured we are not told how.

Interestingly, Manilow’s announcement likens his injuries to those of “athletes playing aggressive sports.” We are informed that “UCLA’s Josh Shipp and the LA Kings’ Aaron Miller recently had similar surgery.” 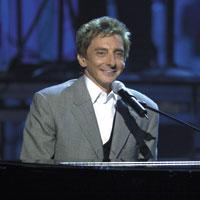 Ah yes, I picture the rouged piano man, who backed Bette Midler at the Continental Baths before going solo in the early-’70s, elbowing savagely under the bucket for rebounds, then high sticking a snarling opponent on a power play.

Regardless, Manilow — with 75 million records sold on smash ’70s hits like “Mandy,” “It’s a Miracle,” “Could It Be Magic,” “I Write the Songs,” “Looks Like We Made It,” “Weekend in New England,” “Can’t Smile Without You,” and disco camp paradigm “Copacabana (At the Copa)” — is an institution in full rally mode. After getting a key songwriter’s spotlight in ’04 on American Idol, Manilow’s high-profile spotlight on Dancing With the Stars keyed the February ’06 debut at number one of his The Greatest Songs Of The Fifties covers album – the first number one debut of his career and his first number one album since 1977’s Barry Manilow/Live.

Manilow plans to be recouped from his surgery in time for the Halloween release of his The Greatest Songs of the Sixties album. Emboldened by the success of his ’50s collection, Manilow attacks the Righteous Brothers “You’ve Lost That Lovin’ Feeling’” (1965), the Beatles’ “And I Love Her”(1964), Herb Alpert’s “This Guy’s In Love With You” (1968), the Lettermen’s “When I Fall In Love” (1962), B.J. Thomas’ “Raindrops Keep Falling On My Head” (1969), and a duet with the Association on a “Cherish”/Windy” medley.

While the origin of the hip injuries remains a mystery, they couldn’t possibly rival the singer’s ’03 broken nose for goofiness. Manilow woke up “disoriented” in the middle of the night, “veered to the left instead of the right,” walked into a wall, broke his nose and knocked himself unconscious.