Mortal Kombat has been around for years and years. The franchise has put out an incredible number of releases — between console and arcade, the number is somewhere over 70. It’s an incredibly successful franchise and it has had both stronger and weaker moments.

Happily, the newest release in the franchise, Mortal Kombat: Armageddon, in its Nintendo Wii incarnation, is a very good game. The game was released to the Playstation 2 and Xbox last fall, but with some tweaks here and there, it has just come out for the Wii, with, of course, motion-sensing control via the Wii Remote.

The main portion of the game, as with almost all Mortal Kombat games, is the head-to-head with the computer tournament (Kombat). Also included here is a relatively brief linear game where the player controls one fighter throughout (Konquest). There is a kreate-a-fighter mode and a demonstration video on how to use the Wii Remote to properly immolate your opponent. Plus, there is a racing mini-game (Motor Kombat) which is similar in style to a kart game like Mario Kart or Crash Team Racing, an endurance mode, and you can, of course, play head-to-head with friends either in Motor Kombat or a regular old battle. 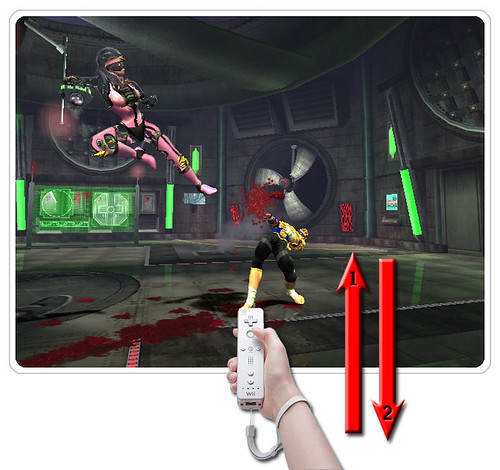 Because everyone wants to know, there are, astoundingly, over 60 different fighters from the history of the Mortal Kombat games that can be chosen. It’s an incredibly wide selection of players, and even if many of them have similar fighting styles, it still is a lot of fun to go through and play as the different ones.

The ultimate question of course is how much fun is Mortal Kombat on the Wii and using the Remote. While it does take some getting used to do the special moves and trial and error to learn to get them right (the game insists you push the B button when starting a special move. I found that the move should be started immediately prior to pressing B, despite protestations in the manual that pressing it after the beginning would not work), it is an enjoyable experience. The moves can take a long time to get right, but general fighting is easy enough, even if using the directional pad to initiate the regular kicks and punches is a little awkward. Once you have them down, most moves and combinations can be executed fluidly, though there are times when executing a move on the Wii Remote fails to translate to it being executed in the game (user error, perhaps?). 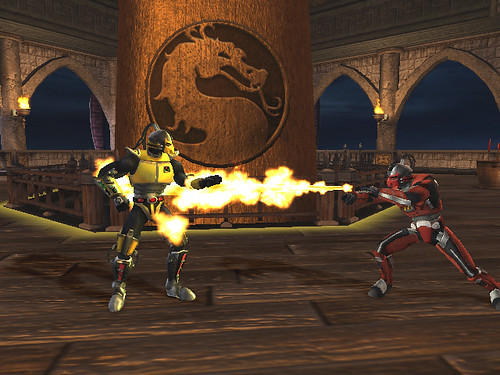 New in Armageddon is a “kreate-a-fatalitity” system, by which players can destroy their opponents when the computer states “Finish him!” (or her) at the end of a battle. Players can enter strings of motion gestures in order to tear their opponent limb from limb (literally). This new system is more difficult to master, and never quite as downright odd as some of the old fatalities, but can be fun to try and figure out.

Though small, and a little silly, the Motor Kombat mini-game provides a wonderful sense of speed and is something I’d like to see more fully developed. It may seem like an odd sort of thing to construct a full-sized game out of, but it could be incredibly fun. 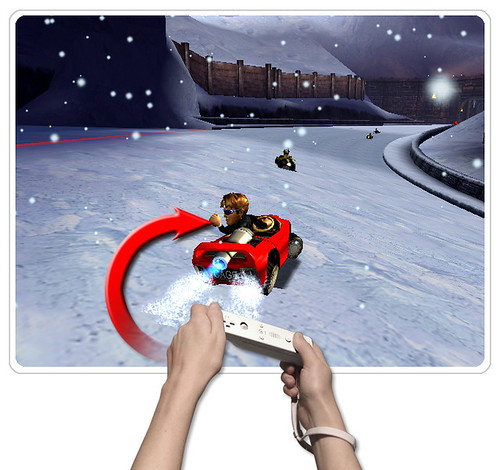 The graphics on Mortal Kombat: Armageddon are quite good, some of the best and smoothest currently available for the Wii; the blood spurts and droppings look wonderful, as do the flames. The sound is solid as well, though, as with all Wii games, the sound that is played from the Wii menu when the game is first selected is far louder than anything that occurs during game play (perhaps Nintendo needs to tweak this).

As stated above, this game was released (in a slightly different format and with online play) for the PS2 and Xbox last fall. However, the experience of playing a game on the Nintendo Wii is unlike anything else currently in existence. This game certainly doesn’t represent the best possible fighting game for the system, the Wii Remote controls are, at times awkward, but it is one of the better Mortal Kombat games, and it is incredibly fun to play on the Wii.

Mortal Kombat: Armageddon is rated M (Mature) by the ESRB for Blood, Gore, and Intense Violence. This game can also be found on: PS2 and Xbox.

A contender for worst Wii title of all time.