As if to give the big middle finger to those (me) who read too much into her recent statement of continued love for her ex-husband Tom Cruise, Nicole Kidman’s publicity camp have confirmed that she is officially engaged to country singer Keith Urban. 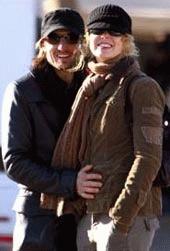 A collective sigh of sadness was heard from the female world. The couple have been dating for almost a year and a half, having met in January 2005 at an award ceremony honoring the two Australian artists (both grew up in Australia – Kidman was born in Hawaii and Urban was born in New Zealand).

One can only imagine the beautiful and naturally conceived children they will make. Hard to say which of the two is luckier.

Spears, perhaps the world’s most advantaged bad mother, has yet to master the basic child safety knowledge required before they let you leave the hospital with a newborn. Children under the age of one are supposed to be using a rear-facing car seat. 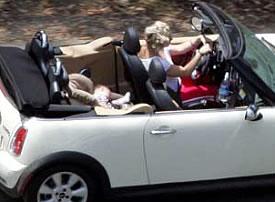 A stunning photo now plastered over the Internet clearly shows Britney’s 8-month-old son, Sean Preston, slumped over — exposed to the sun in her convertible, I might add — facing forward.

This in itself is not a crime: the law states only that she must use a car seat, but why not bother to follow pediatric safety guidelines? There are no advantages for a baby Sean Preston’s size to be facing forward; not to mention the seat he is in is way too big for him and she should be using an infant support device to support his little head and neck.

And again, who drives with their top down, exposing their sleeping child to the sun, wind and elements? Heaven forbid she get into an accident. That poor little baby.

If baby Sean can survive riding on his mom’s lap, being dropped on his head, and with K-fed as his baby-daddy, that kid is well prepared for a life in Hollywood. Suck it up little man, with a new sib on the way, your troubles are just beginning.

If there were any doubt before that Britney Spears is mentally challenged, as in retarded, let all doubt be removed. Has anyone bothered to tell her how to wear her seatbelt correctly while pregnant? Why bother.

Lindsay Lohan’s, Just My Luck: Anything But!

Love her, hate her, one thing is certain, Lindsay Lohan can’t stay out of the news. This time it’s not for her bad girl behavior, but rather for the mostly bad reviews for her film, the romantic-comedy Just My Luck, out in theaters May 12. 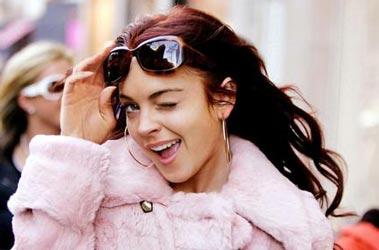 Lohan, in an artistic stretch for sure, plays the vapid, self-absorbed Ashley Albright – an exceptionally lucky young woman working for a celebrity-drenched PR firm in New York. Everything goes her way but she is blissfully unaware of her good fortune until her karma runs out when she meets the most unlucky Jake Hardin (Chris Pine). The two engage in tonsil hockey (after meeting for less than a minute) and their respective luck exchanges.

I am sure this is how it works for Lindsay in real life too.

Despite Lohan’s bad luck and bad press, she will have a chance to redeem herself in her next role alongside Meryl Streep and Kevin Kline, as she plays a sullen teen trying to find her voice in the much anticipated Robert Altman film A Prairie Home Companion. She was also selected as number three on the Maxim Hot 100 women list for 2006 – rawk.

My advice to Lindsay remains unchanged: use better judgment in your off-screen behavior and better judgment for your on-screen roles. This is what separates the wheat from the chaff.