Until now, robots have been able to act very precisely but not feel very precisely. We have been able to program extremely specific actions and behaviors into computers — I vividly recall working around (a lot of ducking) a computerized robotic arm in a jet engine components factory (I swept the floor) as far back as 1980 — but not to receive sensory input precisely in devices where such tactile sensitivity is critical, such as in minimally invasive surgery where a remotely controlled tool is doing the cutting and the surgeon’s human feel is precluded.

However, chemical engineers at the University of Nebraska-Lincoln have now developed a high-resolution touch sensor that may allow surgeons to tell by “touch” at the level of a single layer of cells whether or not they have excised a tumor in its entirety. Ravi F. Saraf and UNL doctoral student Vivek Maheshwari report in the June 9 issue of Science that they have developed a self-assembling nanoparticle device that has touch sensitivity comparable to that of the human finger, about 50 times more sensitive than devices available today. 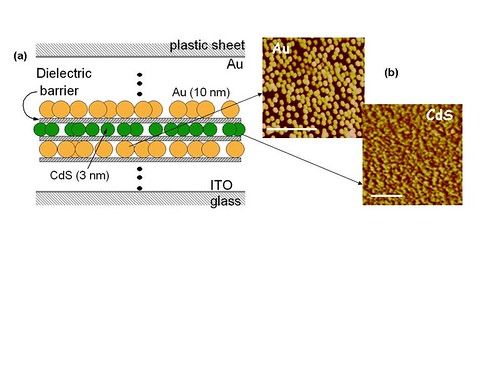 The new device — a film made from alternating nano-layers of conducting gold and semiconducting cadmium sulfide — conjures visions from The Terminator series in that it self-assembles at room temperature and is flexible enough to cover complex shapes.

When the film touches a surface the layers of particles are squeezed together causing the current in the film to change and light to be emitted from the particles. The light is then detected by a camera. 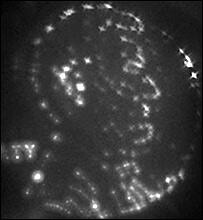 In a demonstration for the Science paper, Saraf and Maheshwari were able to decipher fine features such as wrinkles in Abraham Lincoln’s clothing on a penny and the letters TY in “liberty.”

Saraf sees various important uses for his freaky self-assembling electro-nano feeler thing. “Touch is a sensation they want in robotics because to tell the difference between a cube and a sphere, an ordinary robot takes forever to do it with vision because it has to look from all directions,” he said. “And then, of course, the big thing for the military is to maneuver in darkness. Similar to a blind person, [with this device] you can touch and find your way through.”

But he is most “excited about this because I want to try to decipher cancer at the single-cell level,” Saraf said. “In some cases, cancer tissues are harder than normal tissues, if you take a tissue sample, put it on a glass slide and press on it, you would be able to [“feel”] a cluster of just a few (cancer) cells… Surgeons will be able to know if they have taken out all of the cancer. If they haven’t, they’ll know where to make the next cut.”

Professor Saraf told the BBC he would now like to see if he could create a device that can detect temperature changes as well as texture, enabling it to even more closely mimic human sensation.