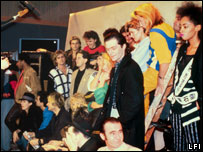 If you were around twenty years ago, I am sure you vividly remember the video where a roomful of UK stars sang “Do They Know It’s Christmas?” line-by-line individually, collectively on the choruses: first George Michael, then Boy George, Bono, Simon LeBon, Sting, Phil Collins, Bananarama, etc. It was the whole new wavey gang organized by Bob Geldof and Midge Ure under the rubric “Band Aid” to raise money for famine relief in Ethiopia, and it was agreat success, the single eventually selling 3.5 million copies in the UK alone. Though perhaps inevitably a bit maudlin, it was even a pretty good song – like Ultravox with guest stars.

Now Band Aid is back with a new generation of performers:

Noel Gallagher, Damon Albarn and Dido are among the latest stars to sign up for a new Band Aid charity Christmas single, organiser Midge Ure has said.

He is also hoping to persuade Radiohead star Thom Yorke and Robbie Williams.

….They will join Coldplay, The Darkness and Keane to re-record the 1984 smash hit Do They Know It’s Christmas?

Travis and Beverley Knight are also signed up, while Jamelia and Katie Melua are among other possible participants.

“It’s a pretty big line-up,” Ure said. “Once you’ve got a handful of people like that, the rest of it will come. The phones are ringing off the hook right now.”

….Ure said artists were “very willing” this time around, but they would not try to recreate the spirit of the original.

“I’m desperate to hear Keane and Coldplay just open that tune up with their pianos and then The Darkness play the harmony guitar bits at the end – it should be great fun,” he said.

….Ure is hoping for a recording session on a Sunday in the first half of November to get the single released in early December – in time to propel it to the Christmas number one spot.

….After the first Band Aid came Live Aid, the transatlantic concert that brought the cream of the world’s music celebrities together, in July 1985.

It is being released on DVD for the first time on 8 November to raise more money for charity, with one million copies produced in anticipation of huge Christmas demand.

The Band Aid Trust, the charity that administers all funds raised by Band Aid and Live Aid activities, has distributed $144m (£79m) for famine relief in countries like Burkina Faso, Chad, Eritrea and Ethiopia since 1985. [BBC]

By 1984, British acts like Duran Duran, Wham! and Spandau Ballet were among the most famous pop stars in the world.

And Bob Geldof was a washed-up post-punk singer with the Boomtown Rats, who had not had a top 20 hit for four years.

But his life, the outlooks of his fellow singers – and the lives of thousands of people on a different continent – were about to change.

On 23 October 1984, BBC journalist Michael Buerk appeared on the evening news reporting from the scene of a biblical famine in Ethiopia.

….Geldof was immediately spurred into action. He thought about writing a song with the Boomtown Rats to make money – but realised their fortunes were on the wane and knew it would not work.

Ure was in Yates’ dressing room after the show while she was talking to Geldof on the phone. She passed it to Ure, who was asked to work with Geldof on a more ambitious charity single.

Ure almost told Geldof he was too busy. But he agreed.

He told BBC Three documentary Band Aid, The Song that Rocked the World: “Little did we know that conversation was going to change ours and thousands of other lives forever.”

The pair set about writing a song, with Geldof coming up with a downbeat verse tune and Ure writing the lighter chorus on a keyboard in his kitchen. The result was Do They Know It’s Christmas?.

….On the allotted day, Sunday 25 November, Geldof and Ure greeted perhaps the highest concentration of British music superstars ever assembled in one place.

Accounts differ about whether the egos were left at the door, but an atmosphere of solidarity and purpose is fondly remembered by most.

U2 singer Bono told the BBC Three documentary: “There was a sense after a while that we were there for other people – people we may never meet or know, but we were here for them.” [BBC]

And they are still trying to “feed the world.” Best of luck to them.

It's always nice to have a gaming experience that is just fun to pick up and play, and Blackwind delivers this with style.