The Rockologist returns, with a few updates to his Neil Young book in a BC exclusive.

Neil Young FAQ Diaries: Separating the Wheat from the Rust

As a relative newcomer to the ranks of published rock authors, one of the more gratifying things I have experienced has been the incredible support from the fans of my chosen subject.

Which, in this particular case, means those diehard Neil Young fans who have come to be known as the Rusties. 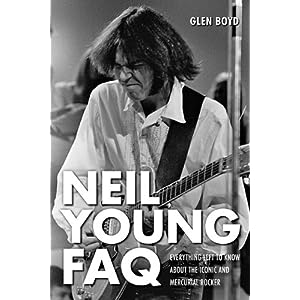 The “Rusties” first began life on the internet as the sort of wildly devoted Neil Young fan group who could quote you the most obscure song from Neil’s vast catalog line and verse without batting an eye, and who have seen the man himself in concert—often on multiple continents—more times than folks like you and I change underwear.

What is important here, is that these are those same Neil Young fanatics who religiously make their way out to the annual Bridge School benefits every year like clockwork.

They do so not only without apology, but by counting these same annual religious pilgrimages to Mountain View, California as simply another notch on their belts of devotion.

Besides the obvious benefits of raising money for a great cause, the signings also brought some much-needed attention to my virgin entry into the rock-book sweepstakes as a newly published author. However, despite this overwhelming support from the Rusties, one gaping hole in the book was brought to my attention by a few fans soonafter.

This was my lack of acknowledging this same fan group in the book itself.

First of all, let’s be clear. Neil Young FAQ was never intended to be a book about the fans—and especially those who follow his every word and concert—often from continent to continent. That part of the process came much later, and long after the actual, initial mission of attempting to document and otherwise catalog all of Neil Young’s recorded and performed music was committed and put to print.

There is no way humanly possible your quite human author here, could have completely succeeded in this massive endeavor. Because when it comes to Neil, there is simply too much essential information and other relevant material there to absorb.

That said, I’d like to think I still did the best I could.

What we did do our best to acknowledge—and apparently fell somewhat short in doing—was those internet and largely fan-based resources who played a crucial role in the creation of Neil Young FAQ.

Chief amongst these would be Thrasher’s Wheat, who I simply cannot stress enough played a crucial role every step of the way in the creation Of Neil Young FAQ—including the foreword, a beautifully worded essay by Thrasher himself.

As for the rest of the resources used in the creation of this book—sites like Human Highway, Sugar Mountain, etc. (use your Google searches, folks), I am largely satisfied I met my obligations. My gratitude is likewise expressed in the book (check the back section of acknowledgements for reference).

So I repeat my debt to the Rusties here. You guys have been awesome, and there is no way this book would have been possible without you. So, again, thank you—seriously.

There is, however, still one bit of unfinished business. Broken Arrow magazine is a quarterly, British-based publication put out by the folks at the Neil Young Appreciation Society.

These folks played absolutely no role in our own research for Neil Young FAQ. But they do a tremendous job in keeping the international fan community abreast of all things Neil.

For that reason alone, Broken Arrow and the NYAS rock.

And in these rapidly changing days of Crazy Horse reunions, new movies, impending auto-biographies (not to mention such un-authorized tomes as my own ), I cannot recommend this resource highly enough.

Happy 4th of July everyone.