Slip this DVD in the machine, and be reminded how much fun rock and roll can be.

The stereotypical mid-life crises for the male of our species is to go out and find a hot car and an even hotter young hottie who's impressed by things like hot cars and a large bank account. They'll dump their wife and family of umpteen years and go out and make themselves look ridiculous in an attempt to find something they think they've lost, but have never actually had.

So when John Hiatt talks about the period in his life in 1993 when he reverted back to his earlier form of full steam ahead rock and roll as his mid life crisis, we understand what he's talking about. Of course he's joking, but his album of that year, Perfectly Good Guitar was a departure from the mellower sound he had come to be identified with in the eighties.

Instead of finding the requisite bimbo to stoke his ego, John found three younger musicians, who would make him work for a living, to form his band, The Guilty Dogs (pronounced Dawags, of course). Michael Ward of School of Fish plays lead guitar, while the rhythm section of bassist Davey Faragher and drummer Michael Urbano came from the band Cracker. Together, the four of them made Perfectly Good Guitar so powerful the Los Angeles Times called it "the most boldly rocking record in more than a decade."

I'm sure there would be some who would dispute that claim, but judging by Hiatt and the band's performance on the newly released DVD Live From Austin Tx, we can see the basis for their contention. Hiatt starts the show off by saying, "Let's see if we can't turn this television studio into a Texas honky-tonk" and he and the Dogs do their damnedest to do just that. 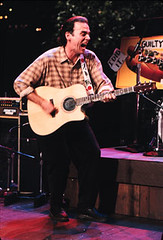 After the opening solo number, "Icy Blue Heart", lulls you into expecting an evening of country blues performed by just Hiatt and his acoustic guitar, the band joins him on stage to make the studio lights shake. Not even one of Stevie Ray Vaughn's performances on this show raised such a ruckus as the power consistently generated by these guys. From the first slinky power chord hit by Michael Ward to the last piece of feedback he generates during the encore of "Perfectly Good Guitar," the action only rests momentarily.

Around the midway point of the concert, Hiatt sends the rest of the band offstage after a particularly wild number that included John climbing up onto the drum riser and howling at the moon, ("Something Wild"). Clutching his heart and muttering about the big one, he approached a small electric piano to perform his signature tune from the eighties "Have A Little Faith In Me."

In spite of having made such an obvious break from that style of music, he sings a beautiful version of the song. Although he has been using his voice to wonderful effect on the songs prior to this one, under these solo conditions the full extent of its effectiveness is revealed. Not only does he have remarkable range and control, able to sustain notes at various points in the scale, he is marvelously expressive as well.

He's just spent the last half-hour growling, sputtering, and howling all over the stage, but is able to slow himself down in an instant to deliver a performance of far more emotional integrity than any number of "sensitive performers" in this day and age. The impassioned plea inherent in "Have A Little Faith In Me" is made real because the honest rough-edged quality of his voice is able to deliver it without once slipping into melodramatic excess.

Although every track on this DVD is exemplary and worthy of mention, there's another one that stands out. "Thing Called Love" is familiar to millions of people who are Bonnie Raitt fans. Hiatt acknowledges her in his introduction by indulging in a little long distance flirting, but aside from the similarity in title and melody line on occasion, his version may as well be a different song.

Unlike Raitt's almost pop approach to the song, Hiatt and the Dogs burn down the house with a Texas Roadhouse Rock version of the song that sees John conducting a poll of the audience halfway through the song, section by section, to see if they are ready for this "Thing Called Love". They've taken the almost rhetorical quality of the question in the Raitt version and turned it into a challenge along the lines of "ready or not, here I come".
But that's this performance all over – full steam ahead and damn the consequences. If this concert is any indication of what the album Perfectly Good Guitar was like, then the Times might not have been far off in their assessment. These guys aren't afraid of going all out and maybe making a mistake; it's rock and roll, not brain surgery, after all. If you slip up, nobody's life is at stake.

That's the attitude they bring to the performance, not that mistakes aren't important but it's more important to go all out than to worry about them. Leave as much of yourself out there on the stage as you are capable of and don't hold back just because you may hit the wrong note. You start fixating on hitting wrong notes and soon you won't even be able to get up on stage anymore.

Of course, if you are like me and only knew the John Hiatt of "Have A Little Faith In Me," this whole concert will be quite the shocker. Once you get over your surprise, believe me when I tell you this is a ride worth taking. This is now the third of the Live From Austin Tx series New West Records has produced from old tapes of the television show Austin City Limits that I've seen. As usual, the sound and video quality are great, with perfect camera work and beautifully mixed sound.

What's really great about John Hiatt, Live From Austin Tx is the whole eighty-two minute concert he gave are included on the disc. Leave whatever expectations you may have about John Hiatt at the door, slip this DVD in the machine, and be reminded how much fun rock and roll can be.