Bad As Me is the best sounding Tom Waits album in years. Well okay, it’s also his first studio album of new material in about seven years, period.

But that’s beside the point. Coming from a guy who has made a career out of writing singularly amazing songs — even as he has all but defied virtually every convention associated with traditional songwriting — the broad, stylistic diversity of these songs is nothing short of stunning. On Bad As Me, Waits revisits many of the same questionable haunts, inhabited by the usual cast of shady characters, that he has for going on a half century now. 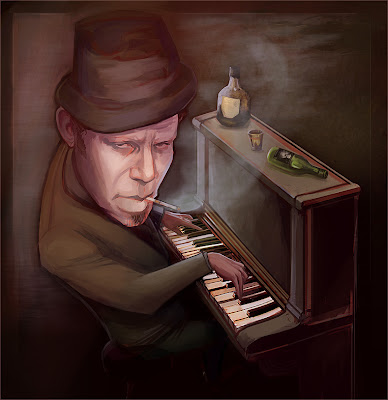 But there are also some surprising new twists here.

On the gorgeous sounding “Talking At The Same Time,” Waits’ trademark cigarette and whiskey laced rasp — that same, late night damaged vocal cough that lends so many of his songs their unmistakable authenticity — is transformed into an unexpectedly lilting falsetto.

While it isn’t quite Smokey Robinson worthy, when combined with longtime guitarist Marc Ribot’s fabulous tremelo effects on guitar, the results effectively take you to that same dark, foreboding cinematic place as a great David Lynch film. The only thing missing is the midget dancing on a checkerboard floor to a torch singers take on “Goodbye Yellow Brick Road.”

No sooner are these darker corners explored, then Waits makes an abrupt about-face to “Get Lost” in a semi-rockabilly rave-up that allows guitarists Ribot and Los Lobos’ David Hildalgo to cut loose with some savage slapback. Ribot and Hildalgo explore similar fifties rock and roll territory on “Tell Me.” Only this time, they take a detour down the sweeter, less threatening paths forged by Phil Spector and Brian Wilson. If Roy Orbison were still alive, this song would be a perfect vehicle for him.

As hard as it might be to imagine the weathered and weary voice of Tom Waits conjuring that same type of original teen-pop innocence, he pulls the trick off quite convincingly here. In fact, the single most astonishing thing about Bad As Me is probably the revelation of Tom Waits as a vocalist of previously unrealized depth.

Like Bob Dylan, Waits’ vocal talents have up until now manifested themselves mostly in the art of interpreting, and especially in the phrasing of his own lyrics. More than anything else, save for the lyrics themselves, it has been this unique voice that has most lent Tom Waits’ songs their unique cinematic quality. The surprising vocal range displayed on Bad As Me is simply an unexpected bonus here.

But the best track on Bad As Me finds Waits resorting to more familiar vocal territory. “Hell Broke Luce” isn’t so much sung, as it is shouted in a shower of expletives coming from the perspective of a war veteran who has been irreparably damaged after a tour of duty marked by listening “to the general every goddamn word” and how “the only ones responsible for making this mess, got their sorry asses stapled to a goddamn desk.”

It is arguably, Waits most overtly (and uncharacteristically) political song to date, and one which finds its hapless protagonist weeping, pantsed at the wind for a joke, and coming down from the meth. In other words, the exact sort of place you might expect to find Tom Waits leering back at you from a dive bar around last call, doing an industrial-blues mashup backed by no less than Keith Richards, Charlie Musselwhite and Flea.

As Tom Waits albums go, Bad As Me ranks right up there with Nighthawks At The Diner, Rain Dogs and Mule Variations. Right now, I’m calling it yet another turning point for sure. In time, it could very well go down as his best yet.