The ideal package for those looking to find a means of introducing themselves to the work of Beethoven.

I'm sure that without much effort, most people could hum a few notes of at least one symphony by Ludwig Van Beethoven, either from the opening refrain of the famous Fifth – duh, duh, duh, dum – or maybe even a few notes from the beginning of the choral elements of the Ninth (the "Ode To Joy").

Aside from Wolfgang Amadeus Mozart and maybe Richard Wagner, there are few other as easily identifiable orchestral composers.

The fact that Beethoven died in 1827, and that there have been hundreds of equally talented men and women who have come after him, makes this even more remarkable. Part of it is the Romantic and tragic appeal of his personal story – he lost his hearing in his 20’s and was never able to hear his final works being performed.

The music may have had voice in the ear of his mind, but the notes as played in life were never more then a faint rumour of vibration through the floor boards.

It's fun to speculate how this may have influenced his composition style. Did he utilize sections of the orchestra that would generate a more resonate sound to enable him to "hear" his later work or was that just a reflection of his Romantic tendencies toward sturm und drum? This line of questioning becomes quickly irrelevant when you begin to listen to his non-orchestral music from late in his life.

What was obvious, according to Paul Yarbrough of the Alexander String Quartet, is that the later works are as much a reflection of his physical state of mind as his psychological and emotional.

As he aged, Beethoven became even more uncompromising in his concessions to both his audience and those who sought to perform his work. Comparing the contents of disc one on Ludwig Van Beethoven: Complete String Quartets with those of the ninth disc, you will hear how they changed from being pleasant, after-dinner music, not particularly challenging to listen to or play, to intense explorations of emotion and ideas. 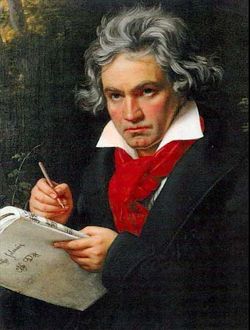 Beethoven's response to people who questioned what he was doing (and by extension his sanity, making it so difficult for people to listen to his music) was vintage brooding artist: "They are music not for you, but for a later age."

If that wasn't enough, woe to the performer who dared voice anything resembling a complaint over his Quartets’ increasing difficulty. "Do you suppose I consider your wretched fiddle when the spirit moves me?"

It would seem that all those portraits and statues representing Ludwig as a brooding and intense man aren't far off the mark. The question is then raised, was his talent matched by this intensity? Did he have the goods to back up the demands he made upon both his audience and his performers? The proof is in the pudding, we're told.

Originally recorded between January 1996 and September 1997, they have been reissued through Allegro Music in a new box set this year. The Alexander String Quartet makes the San Francisco bay area their home base and so probably miss out on some of the notoriety gained by their East Coast cousins like the Julliard Quartet, but they have garnered quite the international reputation, individually and collectively, anyway.

Paul Yarbrough viola, Sandy Wilson cello, and Fredric Lifsitz and Ge-Fang Yeng violins, are more than up to the challenge of tackling the daunting task of retracing the steps Beethoven took in his evolution of the String Quartet as a piece of music. They have the lightness of touch necessary to recreate the light confections of the quartet's court beginnings as well as the skills to keep up with the gradually escalating difficulties in form and emotion.

In fact, they are almost too good. Unless you really have an ear for these things, you're not going to notice any discernable difference in the skill level required by performers due to the form's increased difficulties. The increased complexity of the music becomes obvious by the end, but the Alexander String Quartet makes it appear deceptively easy and they don't miss a beat in their performances, no matter what Ludwig throws at them.

What's especially gratifying to hear is not only are they technically proficient, they are also able to handle the challenge of dealing with the increased diversity of emotion as the pieces progress. The earlier pieces, being light entertainment, are no more challenging than the pop music of today for its audiences.

By the time we get to the five movements of "String Quartet No 15 in A minor, Op.132," on the final disc of nine, we've traveled the equivalent distance of moving from the cheap sentimentality of a Hallmark card to the real emotion of Sylvia Plath.

It's the true measure of their worth as an ensemble that the Alexander String Quartet rises to every occasion the score sends their way. Even more satisfying is their ability not to equate loudness with strength of emotion, rather letting the music speak for itself.

The Quartet is a wonderful conduit for the emotions and thoughts of the composer, something that even classical musicians are wont to let slide if they become famous. The desire to make one's mark exists in all aspects of the performing arts, so it is gratifying to hear players who are able to quell that ambition for the sake of a piece's credibility.

One of the big ironies of string quartets is how they are considered inaccessible by people. For the person new to classical music, they are in some ways easier to come to terms with than orchestral works.

First of all, there aren't all those instruments playing at once, which can be truly overwhelming. Instead, there are just four, whose individual parts can be easily discerned. On top of that, there is usually only one theme that has to be kept track of so you can actually make sense of what's happening. This can be far more difficult with an orchestral work.

The big seller for most people is the length of the average string quartet. Unlike a full orchestral piece, which can be as long as an hour and half and involve more than one disc of music at a time, each of the string quartets contained in this set only takes up half a disc at most. You can work your way through it in small bite-sized morsels and gradually grow accustomed to the flavour.

The Alexander String Quartet's recording of Ludwig Van Beethoven Compete String Quartets is the ideal package for those looking to find a means of introducing themselves to the work of Beethoven. At the same time, it is of a quality such that any aficionado looking for a complete set would be hard pressed to find one better. You couldn't really ask for anything more from this type of recording.

Cave and Ellis impress with their continued collaboration in this memorable body of work, which comes highly recommended.