Folk and traditional music fans will appreciate the intimacy of this live recording.

Peggy Seeger is not as well known in the United States as her more famous musical brothers Pete and Mike. Folk music fans and feminists likely recognize one of her most famous songs, "I'm Gonna Be an Engineer," but for the most part, Seeger remains under the radar of the general listening public, and it is our loss.

She approaches traditional folk music in a way that many do not, treating it with reverence, but also unafraid to have a bit of fun. Her own contributions are numerous. 149 of her best songs were collected together and published in The Peggy Seeger Songbook – Warts and All: Forty Years of Songwriting, and she has continued to write more songs since the book's 1998 publication.

Seeger spent most of her music career in the United Kingdom, maintaining and contributing to the rich folk tradition there. It was there that she met her husband Ewan MacColl, who was also a folk musician and active in the music scene until his death in 1989. Seeger returned to the United States in 1994 and has been collaborating with her music and life partner Irene Pyper-Scott. In 2005, Seeger and her family celebrated her 70th birthday with a special concert in London at the Queen Elizabeth Hall.

This concert was recorded and is now available in a two CD collection called Three Score and Ten (Appleseed Recordings). The concert included contributions from Seeger's children, siblings (both Pete and Mike), a few other well-known traditional folk families (Carthys and Watersons), and a special guest (Billy Bragg).

One of the best aspects of this recording is that it is presented as a continuous whole, with all the snafus and pauses of a live concert. The audio is clear and intimate, with just the right balance to incorporate the crowd sounds. The listener can almost imagine that they are sitting behind the sound board and hearing the whole thing in person.

Most of these songs are performed better on the studio recordings, but that isn't why one listens to a concert. The magic of live music overcomes any weakness in the delivery. This is the first recording of all three Seeger siblings performing together, and one can forgive a lot on that alone.

Throughout the concert, Peggy Seeger shares the stage with various friends and family members, and occasionally hands over the reigns to someone else. Billy Bragg took on her song "If You Want a Better Life" with gusto, leading the group in the rousing chorus just before the intermission and end of disc one. He also incorporated his good humor in a duet with Seeger for the song "Darling Annie."

The Seeger siblings come together for the first time on the recording in the latter half of the second disc. They sing the traditional tune "Cindy," which is one of their favorite songs. Following that, Pete leads three of his own songs, including "Where Have All the Flowers Gone," and he does a pretty good job for an 86-year-old man. 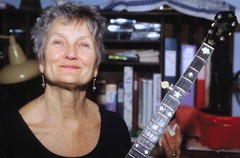 One of the most powerful moments in the concert is when Peggy Seeger recites a poem she wrote about her mother, Ruth Crawford Seeger, entitled "My Mother Is Younger Than Me." Her mother died at the age of 51, and Seeger's poem poignantly notes that her mother will always be that age. It speaks to anyone who has lived longer lives than their parents, and it even speaks to those of us who have not yet arrived at that age.

This is not a definitive collection of Peggy Seeger's music, nor is it intended to be. It is an informative and entertaining glimpse of a handful of songs and poems that are significant to Seeger, including a variety of traditional pieces. Folk and traditional music fans will appreciate the intimacy of this live recording.