With her second release in the US, this Australian singer/songwriter has continued to write about broken relationships and self-exploration.

My first introduction to Missy Higgins was on a Frontier Airlines flight to Denver from Seattle. Frontier has little screens on the backs of the seats that show in-flight movies and television shows, among other things, and at one point I glanced over at my seatmate's screen and saw a bit of the video for Higgins' song "Ten Days." I was immediately enchanted by the grin on her face, and switched my screen over to the music channel so that I could hear the music as well. It later struck me that Higgins' sunny disposition in the video didn't quite match the heartache of the song's lyrics.

With her second release in the US, this Australian singer/songwriter has continued to write about broken relationships and self-exploration. On A Clear Night begins with stark piano chords and Higgins' voice, soft and sad. "Where I Stood" is an attempt to explain why the protagonist had to end a relationship, despite their continued feelings of affection for the other. It could be considered to be a follow-up to "Ten Days," but according to Higgins, that honor goes to the sassy, up-tempo song "Peachy." In that song, the protagonist is wrestling with the realization that the other person has already moved on and is doing just fine, thank you very much. Whereas Higgins' vocals in "Where I Stood" carried the weight of sadness and regret, they now contain an edge of bitterness in "Peachy." It's subtle, but characteristic of the way she can add depth to the simple lyrics of her songs. 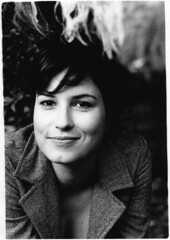 "Steer" has the honor of being the song from which the title of the album is drawn. It is also the first single, and rightly so. The music arrangement gives the listener a sense of anticipation and hope, which appropriately matches the self-empowerment in the lyrics. According to Higgins, unlike many of the rest of the songs on the album, this one did not come from a dark place. Instead, she was inspired by a clear night sky and the realization that it is pointless to dwell on negativity for too long. "But the search ends here / Where the night is totally clear / And your heart is fierce / So now you finally know / That you control where you go / You can steer."

Crowd favorite "100 Round the Bends" made its way onto the album as the second track, and is a pleasant musical shift from the piano-driven opening track. Featuring acoustic guitar, it has a hint of reggae on the edge of the pop-rock arrangement. The chorus talks about going "100 around the bends" in a car, and I have to wonder if that is in kilometers or miles? Regardless, the implication is that there is speed involved, and that it what the protagonist will use to vent his or her frustrations.

The production on On A Clear Night is subtle and highlights Higgins' voice without making it too obvious that it has done so. It's a characteristic that is common for lyrically-focused music, and in the flood of flashy unsubstantial pop tunes that seems to never stop, it's refreshing to have something that grabs the listener and demands that attention be paid to the message. Clearly I am not the only music fan that feels this way, since Higgins' fall tour in the US sold out quickly.

Currently, On A Clear Night is available in the US only at Borders stores and in the iTunes music store. It will have a wider distribution in January 2008. If you like your music to have some substance and depth, and to have a long shelf life, then pick up a copy of On A Clear Night. You won't regret it.