If "smooth" is a word you never thought would be spoken in the same sentence as King Crimson ("Projekct" or otherwise), you are not alone.

This album is probably going to surprise a lot of people. Given the heavy names attached to it, and particularly the King Crimson pedigree, it might also come off as mildly disappointing — at least on an initial listen. Although the vague subtitle coyly brands this as “A King Crimson Projekct,” Robert Fripp seems content to stop just short of labeling this is as the latest full-on incarnation of the pioneering progressive rock group he founded some forty years ago. 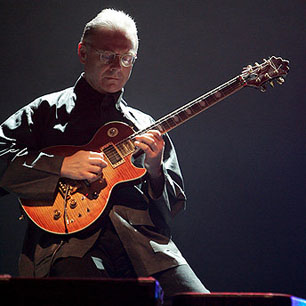 In this case, keeping that particular link at arms length is probably somewhat appropriate. A Scarcity Of Miracles bares little resemblance to either the frenetic histrionics of Red era Crimson, or the stately prog-rock sweep of the band’s earliest work (despite the return of saxophonist Mel Collins). Rather, it falls somewhere in the middle.

Along with Fripp’s far too occasional guitar soundscapes, the vocals of unlikely collaborator Jakko M. Jaksyzk (Level 42) provide the clearest link to the ghost of Crimson’s past. On songs like “The Price We Pay,” his voice comes eerily close to being a dead ringer for past Crimson vocalists Greg Lake and John Wetton.

But perhaps the oddest thing about this album is just how smooth it sounds. If “smooth” is a word you never thought would be spoken in the same sentence as King Crimson (“Projekct” or otherwise), you are not alone.

Yet the way Mel Collins’ saxophones swirl in and out of the mix on songs like the aforementioned “Price We Pay” recalls the atmospheric sheen of Andy Mackay’s work on Roxy Music’s Avalon, more than anything with Crimson. On the closing track “The Light Of Day,” Collins’ drifting saxes are equally matched by the ebb and flow effect of Jakszyk’s keyboards.

If anything, this album has the same kind of distinct, dreamy feel to it as the previously mentioned Roxy Music classic. It’s just very soothing, “smooth” sounding music (there’s that word again). It also has quite an atmospheric feel to it, although not so much in the ambient sense of Fripp’s sonic “Frippertronics” explorations with Brian Eno. The truth is, A Scarcity Of Miracles may be the most song oriented record Fripp has done since the days of In The Court Of The Crimson King and Lizard.

Fortunately, the prog fan’s dream rhythm section of bassist Tony Levin (Peter Gabriel, Remain In Light era Talking Heads) and monster drummer Gavin Harrison (Porcupine Tree) get a chance to shine on “The Other Man,” the lone track here displaying flashes of the darker, more musically dangerous side of King Crimson. Fripp also gets in some of his trademark “treatments” here, as he also does on the title track.

But mostly, this is a rare case of some of the best musicians in the world really laying back for a change, and allowing the songs to be the focal point. For a band more traditionally prone to a certain degree of musical excess, it’s an oddly refreshing change. It just might take some getting used to though.

In addition to the standard CD version, A Scarcity Of Miracles is available in vinyl and deluxe CD/DVD-A versions. The latter features 5.1 and high def 24/96 stereo mixes, and a bonus album of alternate mixes.