About ten years ago, singer/songwriter Elisa Peimer tested the waters with the release of her eponymous EP. It was received with critical acclaim and garnered comparisons with the popular female pop/rockers of the time. Since then, she has released three more full-length albums, with her most recent, Pull of the Moon, hitting record shelves last month. After listening to that one, I can confidently state that the praise she has received is well-deserved.

One main characteristic of her songwriting is an undercurrent of hopefulness, even when she is singing about less-than-hopeful situations. Pull of the Moon begins with a song that serves as the introduction to the rest. "Find My Way Home" talks about the search for home, with home as a metaphor for things like love, joy, safety, and stability. The song indicates that she hasn't found home yet, but that she's confident she will eventually. The rest of the songs on the album then alternate between exploring aspects of the beginning of relationships and the end of them, all the while Peimer continues to seek home, in whatever aspect that may mean for her.

The album as a whole has a 1980s ballad rock feel to it. The production is definitely modern and rich enough in depth to stand up to the headphone test. 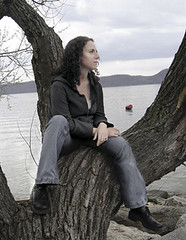 It's the arrangements that seem to be fixed in time with straight-forward percussion and lead electric guitar flourishes, and the standard verse-chorus-verse-chorus-bridge-chorus song structure. Often I found myself wondering what an acoustic version with minimal percussion would sound like. There are a few songs that definitely fit the arrangement, such as "Living in a Bubble" and "I Give," but I think many of them could shine even more with less instrumentation weighing them down.

After a while, I can grow weary of in-love and out-of-love songs, and this album does begin to drag occasionally for me. However, there are some songs that stand out with the shear creativity of how the situations are presented. "I Give" puts a one-sided relationship into the metaphor of a card game, and I found it easy to relate to. I think everyone has found themselves struggling with imbalanced relationships, any kind of relationship — family, friends, lover, etc. — and the song is non-specific enough to speak to all of them.

"Marine Layer" uses the meteorological sciences to describe a relationship gone sour. I had to look up the term to understand what it means, but even so, the context in the song is enough to get the gist of it. The refrain is almost hypnotic, and the arrangement is subtle enough to allow the beauty of the songwriting to shine through. It's a good example of how to end an album in a way that encourages the listener to hit the play button again.

Pull of the Moon is a pop/rock album with solid songwriting, and you've got to give it credit for that. Even after just a few listens, I had hooks stuck in my head on repeat (such as the chorus for "Set To Fly"). Sure, it has some weaknesses (as mentioned already), but Peimer is consistently good at delivering well-crafted lyrics, which in the end are able to make up for some lack-luster arrangements. Not to mention, she's got a set of pipes that can easily rival the likes of Stevie Nicks or Sarah McLachlan.