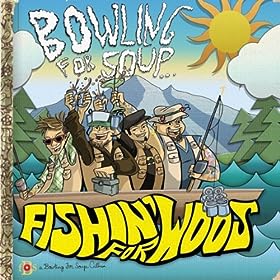 Bowling For Soup started out as a group of snot-nosed young ‘uns doing punky power pop anthems like “1985,” which compares to the Fountains of Wayne classic “Stacy’s Mom” from way back in 2003. The band has always been about rambunctious fun, never taking itself seriously.

At this point in its career, the band is hitting middle age with members having kids of their own, and it’s been signed by Disney to make cartoon theme songs. So don’t expect any startling revelations here, as the band’s 11th album, Fishin’ For Woos, follows the same BFS template, and like Will Ferrell’s character in the movie Old School, it’s older guys killing off brains cells as they relive their college years, with songs about Spring Break, hot girls and partyin’ all night long.

The band knows all the ingredients needed for a pop hit, and “S-S-S-Saturday” comes pretty darn close. It’s got the required riffs and hooks that will have you singing along. But on other tracks, it starts to resemble self-parody, as I really thought “Here’s Your Freakin Song” was something from Weird Al Yankovic. Other tracks seem to follow the formula, but without a musical hook in the chorus it tends to be forgettable, like “Girls In America.”

The problem here may be a lack of any kind of musical growth. Even punk pop bands with frat boy lyrics like Green Day moved away from Dookie and matured into social commentary. It seems these guys have fallen into the same trap as Smash Mouth, doling out disposable pop for the fan base, content that they are good at what they do. The trick is how to keep things exciting without growing stale, and they hint at this with “Turbulence.” The song is like an inspirational commencement speech set to music, and it feels a little deeper than the other tracks here. The other ballads reinforce the fact that BFS is more than explosive guitars and drums.

Bowling For Soup is not too old to rock and roll. The band just needs to start singing about what’s relevant to its life instead of trying to market to Disney’s core audience. But despite this, fans will enjoy Fishin’ For Woos, and if you’re looking for a summer party soundtrack, it fits the bill perfectly.

The Power Popaholic (aka Aaron Kupferberg) is a music blogger that focuses on the genre of power pop and melodic rock. I also report on live shows, tour dates, gossip, MP3′s, videos and just about anything a power pop fan could want. Reviews have been featured in The Rock and Roll Report, The Christian Science Monitor, Virgin Top Music Blogs and The Seattle Post-Intelligencer. To read past reviews visit www.powerpopaholic.com

The play acutely dramatizes the strike using only three characters, and suggests parallels with our age that go beyond the current resurgence of union organizing.