Lady Day: The Master Takes And Singles is one of the best tributes to Billie Holiday that I've heard and seen yet.

I remember the first time I became aware that there might be more to music than just the popular music of my generation. It wasn’t that I didn’t know that other stuff existed, I had heard plenty of classical music and seen far too many musicals on television to not know about them, I had just never bothered listening to it. Then one day my brother brought home a double album of Billie Holiday music, God Bless The Child, and I happened to hear him playing it one evening.

I was fascinated, and the first chance I had, I sat down and listened to the whole album. It must have been a greatest hits package because not only did it have the title track, but it also had, “Strange Fruit”, “All Of Me”, and a bunch of other songs that I’ve long since come to associate with Billie. Something about her voice appealed to me like no other female vocalists I had heard before then.

Instead of a sort of wispy sound, like so many of the folk singers I was accustomed to, she had an earthiness that gave her strength. She also sang about subjects with a sincerity that was absent from most singers I knew, whether male or female, that made even a potentially corny song believable. To say I was hooked right from the start is an understatement. 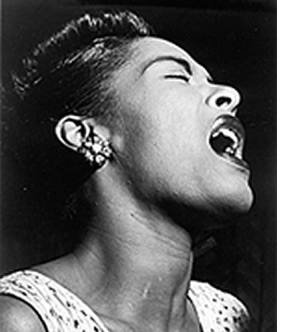 Since that time, I’ve listened to many different collections of her music, from the poorest quality live recordings to some expertly re-mastered studio tracks. I’ve also watched some very poor video of her performing transferred onto to DVD without improving the quality very much.

Of course I’ve also learned the details of her life, from what little is known of her early days, until her final surrender to her addictions on July 17th 1957. Anyone who has listened to her later recordings, especially some live ones, can hear a thinness in her voice that wasn’t present on earlier recordings. I’ve always found it difficult to listen to them because it makes the sadness and regret at her death that much stronger. You have to wonder at those people who produced those later albums, especially the ones that were released after her death, and their complete lack of respect for Billie as a performer releasing these subpar performances in the hopes of making a quick buck off her name.

I’ve spent a lot of fruitless efforts over the years looking to replace that original God Bless The Child double album with something with better sound quality and having as good a selection of music as featured on those albums. Well I don’t think I’ll have to look any further than the forthcoming Columbia/Legacy four CD set Lady Day: The Master Takes And Singles. As the title suggests these four discs contain all of Billie’s best recordings of some her best loved songs.

But it’s not just the old familiar stuff repackaged again in a different format, there are recordings of hers on this that I’ve never heard before. Heck, I didn’t even know she had recorded a version of the old Marlene Dietrich hit “Falling In Love Again”. Come to think of it I don’t think I’ve ever heard it sung without a German accent let alone by Billie, who puts her own indelible stamp on the song – I barely recognised it as the same song.

Perhaps the underlying sorrow I heard in Billie’s version was only due to my awareness of how unlucky she was in her choice of partners, going from one abusive hustler to the next. Is it any wonder she would sing that song with a trace of self-mockery and regret? Perhaps on some of the poorer recordings from late in her career she might have mailed in a performance or two, there’s none of that on this disc, so it’s not to wonder at the depth of feeling heard on “Falling In Love Again”

Even songs I thought I knew well, like “Them There Eyes” and “Billie’s Blues” have a lot more to them than I had remembered. Maybe in part that’s because the sound quality was improved so much from the recordings I first heard, or perhaps the versions on these discs are simply better. Whatever the reason in a lot of cases it was like hearing some songs for the first time. 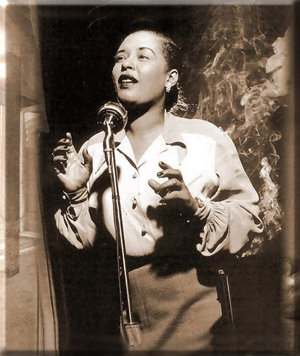 So many more nuances of her voice are distinguishable that I was able to pick up on more of what she was trying to do with her phrasing in each song. She always insisted she was a jazz singer, not a blues singer, and on these CDs, the distinction is very clear. Instead of belting out songs as was the style for blues singers of the day; she was the mistress of subtlety. A word here and a vocal inflection there spoke meanings, and finally being able to hear them clearly is a real gift.

Although these tracks were all recorded from 1936 – 1942, and could be considered her early years, the truth of the matter is that they were also probably some of her best years. Her voice hadn’t started to succumb to the ravages of drug and alcohol abuse, and she was still experimenting with what she could do. Sometimes listening to a brilliant artist take risks at an early point in their career is far more rewarding than listening to the same person latter in life when they have settled into a rut.

What really sets this compilation a further head and shoulders above others is that Lady Day: The Master Takes And Singles includes wonderful liner notes. First is a really good and non-exploitative history of her professional and personal life written by Gary Giddins. But, even better, as far as I’m concerned, are the details provided about each track on the recording.

Even though only three orchestras are listed as accompanying her on these recordings, the membership in those bands was as fluid as the music they played. This meant that over the course of the seven-year period covered she played with what was the cream of the crop of jazz players for that time. Each time the players change on the recording the track listings make sure to annotate who exactly is playing what instrument. Some names stick out more then others, like Benny Goodman on clarinet, while some are session men whose names and careers have vanished in the mists of time.

Billie Holiday’s career was much shorter then people like Ella Fitzgerald, but in the twenty-five years she recorded, and especially in the first fifteen or so when she was still at her peak, she was the best female vocalist in the jazz world. She remains to this day, fifty years after her death, still one of the most distinctive voices in jazz music.

The four disc set and booklet Lady Day: The Master Takes And Singles is one of the best tributes to Billie Holiday that I’ve heard and seen yet. When it goes on sale September 25th snatch up a copy fast, no matter what the price, it will be worth every penny.