Eric Olsen November 20, 2004 Comments Off on Murray and Anderson Team Again in The Life Aquatic With Steve Zissou 70 Views 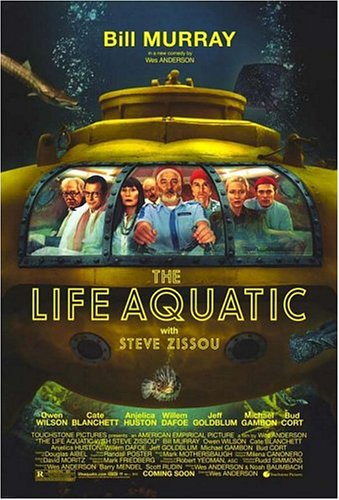 They are joined on their voyage by a young airline co-pilot who may or may not be Zissou’s son (Wilson), a beautiful journalist (Blanchett) assigned to write a profile of Zissou, and Zissou’s estranged wife and co-producer, Eleanor (Huston). Complications include pirates, kidnapping, and bankruptcy – you know, the usual.

The film was shot on location in Italy and at Cinecitta studios in Rome. The undersea world of the film was created in collaboration with the director and stop-motion animator Henry Selick (The Nightmare Before Christmas, James and the Giant Peach).

Anderson is also known for the quality and the care that goes into his soundtracks. The focus this time is ur-period early-’70s Bowie (“Life On Mars” “Starman” “Rebel Rebel” “Rock ‘n’ Roll Suicide” “Five Years”) as rerecorded samba style by Brazilian Seu Jorge, who also appears in the film, in addition to two in their original form (“Life On Mars” and the trailer theme “Queen Bitch” with some of Mick Ronson’s most elemental, powerful guitar work). A quirky blend of Devo, Scott Walker, Joan Baez, Iggy and the Stooges, Paco de Lucia, The Zombies, and original score selections by Mark Mothersbaugh round out the musical buffet.