He has spent the time since confounding his critics both inside and out of the ring.

I’ve never been a big fan of boxing; the attraction of seeing two people whale away on each other has always alluded me. There’s also always been that sort of sleazy aftertaste associated with the sport; poor kids from the slums risking their lives and unscrupulous promoters making big money from their sweat.

But there was a period of about eight or nine years from 1970 onwards, that one figure stood out in the boxing world as no other had before or will ever again. I first became aware of Muhammad Ali when he lost his come back fight to Joe Frazier in 1970. It was his first fight back after having had his world heavyweight title stripped from him for refusing to report for the draft and fight in Viet Nam. 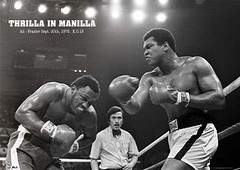 I was only nine years old at the time and knew nothing of the background behind the fight, Ali’s history as the young Cassius Clay, his conversion to Islam, or his history of draft resistance. But there was something about him that captured my imagination, and held me enthralled up to his rematch with Leon Spinks where he once again retained his championship.

When Frazier beat him in 1970 I remember being disappointed, but if you had asked me why I probably wouldn’t have been able to tell you. Looking back on it now I understand my feelings better. They were all brought back the other day by an article in the on line “Globe and Mail” which reported on the forty best magazine covers of the past forty years.

The initial picture that accompanied the article was actually of the third place winner: Esquires’ 1968 picture of Muhammad Ali pierced by a number of arrows a la St. Sebastian.

They had obviously chosen the image to depict his tribulations over being banned from boxing because of his refusal to fight. I wonder now if the irony of a fighter refusing to fight in a war was lost on people back then? Or were there so many other issues in America in 1968 that irony was a luxury reserved for people outside the fray?

I understand now why Ali appealed to me unlike the rest of my classmates, who merely parroted the putdowns that were common those days: boastful, obnoxious, and a show off. Abuse victims need figures of hope and encouragement; they also cheer for the outsider and the underdog. If he or she loses the disappointment isn’t as bad, but if they do win out against the odds, than it gives you hope for yourself.

I doubt that any of those thoughts would have formed that coherently in my young confused brain when I chose to identify with Ali, I just thought he was cool. Neither my parents nor older brother had much interest in sports, so there was little or no influence exerted on me when it came to decisions about whom to support or cheer for. The only conflicts that ever ensued was attempting to read the sports section to find out the results of his matches.

In those pre pay per view satelitte broadcasts, a fight fought on the other side of the world in Zaire or Manila, might not find it’s way into the sport’s section until a day or two after the bout. In those days “The Globe and Mail” sport’s section was tacked on to the business section, and read back to front. In order to read anything I had to be able to grab the paper before my father came down to breakfast, and scan through it quickly. Otherwise I wouldn’t see it unless it returned from work with him that evening.

So I was only able to follow Ali’s triumphs over Foreman, Norton, and finally Frazier in quickly grabbed snatches. Then there was the series of stupid fights, as a board Ali looked to make money while waiting another serious challenge. It was that period of his career where he came closest to becoming a cartoon figure: a caricature of himself. The seventies seemed to bring out the worst in a lot of people.

In the late seventies one of those “bums” surprised him; Leon Spinks beat an obviously out of shape Ali. In his hey day he could have stopped Spinks cold, but now he was nearing the end of his boxing days, and unprepared, the unthinkable happened. He lost.

All the old detractors came out of the woodwork where they had been lurking. That loud-mouthed punk had finally got what was coming to him. No one believed that he could come back again, except Ali. The experts wrote him off as too old and too slow.

In probably one of the last fights televised live on Network television Ali danced around Leon Spinks for fifteen rounds. Bobbing and weaving, he hit Spinks at will. It didn’t matter that his punches lacked the power they once had, what mattered is that he couldn’t be touched. He was still up on his toes in round fifteen, effortlessly holding his opponent at bay with jabs to the face and fancy footwork.

Up in the broadcast booth, Howard Cosell, who had covered Ali’s fights for longer then anybody else in the media, couldn’t help himself. There had been times when the two men had been at odds with each other, but not now. As Ali put on a boxing clinic Cosell became less and less the objective media representative and more the fan. At one point in round fifteen he did something I’ll never forget: (for a variety of reasons) he recited chunks of the Bob Dylan song “Forever Young” in recognition of Ali’s achievement that night. (This wasn’t the last time that Cosell would break out of his sportscasters’ role and reach out to the audience: on the night John Lennon was murdered, he was working Monday night football. All of a sudden the commentary stopped. He came back on the air and made the announcement of what had happened, and said he didn’t think it appropriate to continue on with the commentary, and just let the game run on its on.)

That fight was pretty much it for Ali’s career. Larry Holmes was waiting in the wings, and became the next champion. Heavyweight boxing hasn’t been the same. Those same people who probably dumped on Ali have finally realized what a unique person he was, and how much money he made them. Without his presence the sport has once again been relegated to the fringes of the sports sections. The lightweights and the featherweights have their followers, especially amongst the Latino population in the United States, but they don’t have the glamour of the heavyweights.

The combination of Don King, Mike Tyson, and Bob Avrum has left such a negative impression in so many people’s minds that it will take a boxer with the character and personality of Ali to recapture people’s hearts. But there will never be another Ali.

Ali was, and still is, a symbol of hope for so many people, especially those of African descent. He showed that the game, any game, could be played on your own terms, and that you could stand up for what you believed in and still win. Maybe that’s why he’s treated like a head of state whenever he travels through Africa.

With his walk reduced to a shuffle and his speech slurred through the ravages of Parkinson’s disease, he still commands immediate attention when he walks in a room. On the T.V. clips I’ve seen of him he still carries himself with dignity and that mischievous twinkle still shows up in his eye.

Thankfully somebody around Ali ensured that he would have money when he stopped boxing so he can now live out his days in comfort. When he boldly predicted he would knock out Sonny Liston more then forty years ago, he was dismissed as a loud mouth that would soon get his comeuppance. He has spent the time since confounding his critics both inside and out of the ring. Here’s hoping he’s able to for years still to come.