The Three Musketeers in 3D: a fun, reckless, action-packed take on a swashbuckling classic

Movie Review: The Three Musketeers (2011) – Not Too Proud for Predation

After more than 20 adaptations of the famous swashbuckling novel The Three Musketeers by Alexandre Dumas, here comes another one. This rendering is a postmodern re-reading by Paul W. S. Anderson, steampunk-styled and slowmotion-shot, boasting German-French-British co-production, and the biggest budget ever. Oh yes, it is the first one in 3D.

Fidelity in adaptation disputes seem inane in 2011, especially in this case, where the plot doesn’t divert too dramatically from the original (with the exception of the flying battleships built according to Leonardo Da Vinci plans). The story is well known: Young D’Artagnan (Logan Lerman) is headed for Paris to become a Musketeer and manages to meet the entire cast of the main characters on the same fateful day: the nefarious one-eyed Rochefort (Mads Mikkelsen) and scintillating Milady de Winter (Milla Jovovich, gorgeous), the leader of the once legendary trio Athos (Matthew Macfadyen), the soulful former priest Aramis (Luke Evans), and muscular Porthos (Ray Stevenson), all of whom D’Artagnan impresses with his brazen cockiness and rustic charm.

While young King Louis XIII (Freddie Fox), bipolar, bad at chess and bored with big politics, is preoccupied with the latest fashions in coiffure and dress and a very cute crush on his fresh-faced wife Queen Anne (Juno Temple), Cardinal Richelieu (Christoph Waltz) is the one playing with the country’s fate (metaphorically and otherwise – there are adorable ‘toy’ ships on the floor of his ‘office’). The three somewhat embittered Musketeers joined by the ideallistic D’Artagnan have to battle Duke of Buckingham (Orlando Bloom, strangely styled) to save France and the honour of the Queen. Thank God there is Barbie-faced Constance (Gabriella Wilde) for a peachy kiss before the credits roll.

Alex Litvak (Predators) and Andrew Davies (Pride and Prejudice 1995) are the writers here, and it is no wonder that The Three Musketeers are a steampunk comic one minute and candy-coloured costume adventure the next. Anderson plays with intertextuality here and there (some critics call it stealing), alluding to Pirates of the Caribbean (and hoping against hope for a franchise: games, toys, keep dreaming), The Princess Bride and The Empire Strikes Back, Pulp Fiction, as well as referencing Bond, Indiana Jones and Batman movies, comic strip and cartoon clichés more generically. Two supporting actors – Christopher Waltz as Cardinal Richelieu and Til Schweiger as Cagliostro – will be instant reminders, to some viewers at least, of another movie that took liberty with famous historical events, the delightful Inglourious Basterds, which doesn’t elevate The Three Musketeers’s B-movie status but rather encourages unwelcome comparisons. 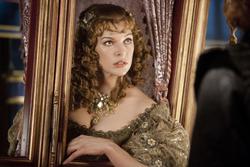 Anderson may not be as good as Tarantino at rewriting history but he definitely loves beauty, be it the falling-apart face of a raging zombie, or the breathtaking set pieces of fake 17te Century France (the movie was shot in Germany). But Anderson loves beauty even if it doesn’t signify anything: pure form without substance.

In cinematic terms, he is willing to shoot a scene for its mere eye candy value, regardless of how nonsensical or unnecessary it is in terms of plot/characterization/message (elements the director is not really bothered about either). He likes to shoot the amazing stuntwork in slow motion – in case the viewer misses something. He loves long, menacing corridors stuffed with traps – blades, wires, bullets, explosives; corridors in zombie-ridden underworld virus-stripped of people or corridors in an immaculate 17th Century palace leading to the Da Vinci’s vault – who really cares? Anderson loves throwing lethal weapons at his beautiful wife (and the viewer, thanks to 3D) so she has to twist and bend her body in ways that would demand a very unpleasant session at the chiropractor for most normal folk. Anderson is not going to deny himself that pleasure in The Three Musketeers, even if Dumas turns in his grave (like many of the Minsk viewers commented on leaving the theatre) and even if the said vault with its invaluable contents lies in ruins (gorgeous ruins).

There are plenty of beautiful shots here: the scuba diver, mask of fluid black gold, emerging from the canals of Venice; the improbable sky battle between the two enemy legions; Milady balancing in her corset and tights on top of a sculpture, in turn perched atop of a building; the wonderful siege of the Tower of London; the climactic cathedral roof battle between D’Artagnan and Rochefort. The colors pop: neon blues on the king’s guards’ uniforms; Richelieu’s raspberry cloak; black ominous clouds; luscious Kelly green of the gardens. Above all, Milla Jovovich has only grown lovelier. Her porcelain skin, slightly pouted lip, glistening locks, cornflower blue eyes, and pale bosom, struggling to get free from the restraints of a tight corset are as fun to watch as the exquisite chandeliers and candelabras, glistening with opulence all around her, silk lace accentuating her long neck, feathers trembling in her hat, halos of diaphanous hoods around her face catching the light in sun-drenched rooms and illuminating her rosy cheeks – all as airy as the The Three Musketeers itself. But enough of that.

Even if plot-wise Anderson has decided to stay clear of blasphemy, the tone of the movie is decidedly ‘now’. Acting, characterization and dialogue are purely mechanical: breasts are breasts, flying cannonballs are flying cannonballs, actors are actors, not necessarily the characters they are supposed to be playing. Logan Lerman is a tad too young for the role of D’Artagnan, but when the light hits his face right, there is a hint of a very subdued Cillian Murphy in his presence, which doesn’t save his performance. Ray Stevenson as Porthos looks like an overweight Brad Pitt when a magnanimous lady friend gropes his manly waist. The rest of the actors, happy with their checks, are merely there to pronounce their lines. Even Venice, Paris and London look like retro Lego villages. In 3D.

The humor part is sad. Besides the red carpet reference and all that ‘manly’ talk about clothes so indicative of the current Project Runway era, there is little to laugh about. Excrement jokes are never funny, and Planchet (James Corden), the supposedly comic-relief vehicle, is simply painful.
Many a critic has called the movie soulless, empty, stupid, an epitome of ‘corporate filmmaking’. Maybe these critics like to eat foie gras with mustard seeds and green onions in duck jus every day. Maybe they are so perfect they never sink as low as pizza or peanut sandwiches. I don’t think it helps to approach this movie with Almodóvar or Scorsese expectations. If someone is looking for an equivalent of exquisite French cuisine on a Saturday night at the movies choosing a director who shot Mortal Kombat, Resident Evil, Alien vs. Predator and Death Race isn’t such a good idea. This is a pizza, everyone. And as that, it’s fully satisfying. Burp.

On the plus side, the movie is never boring like the unforgettably tedious The Man in the Iron Mask. And even though the viewer knows the outcome of each sequence, it is impossible to take one’s eyes off the screen. There is no real ending but there is a very optimistic/opportunistic hint at a sequel. The movie is PG-13 but I have to admit my four-and-a-half-year old was much more interested in The Three Musketeers than the age-appropriate (and lovely) Dolphin Tale, which only proves this steampunk action adventure blockbuster is aimed at (and will satisfy most) a younger audience. This completely innocuous remix of a classic provides brainless escapist entertainment. But will the youth equate The Three Musketeers 3D with Dumas’ veneration of chivalry, loyalty and camaraderie? Now there’s a scary thought.

Theater Review: ‘Songs for the Fallen’ at the New York Musical Theatre Festival