DeNiro is at the helm and Damon is on the screen, but will this picture bring home Oscar gold?

Whatever problems it may have, The Good Shepherd is an enjoyable, well-made film.  It features numerous strong actors performing well, an intricate plot, and is ably directed.  That being said, it almost certainly is not as good as people hoped it would be.  While it does provide a good time at the movies, it is, most likely, not going to be an Oscar contender.

Robert DeNiro helms the effort, with Matt Damon as his leading man.  Damon is surrounded by a stellar list of actors:  Angelina Jolie, Billy Crudup, Alec Baldwin, Timothy Hutton, Joe Pesci, John Turturro, William Hurt, Michael Gambon, and DeNiro himself amongst many others. The story itself follows Damon’s character, Edward Wilson, and tells the story of Wilson’s life as well as the creation of the CIA.

Damon clearly has the gravitas for dramatic roles (see Good Will Hunting) and has the action chops necessary for action-spy films(see The Bourne Identity).  The character 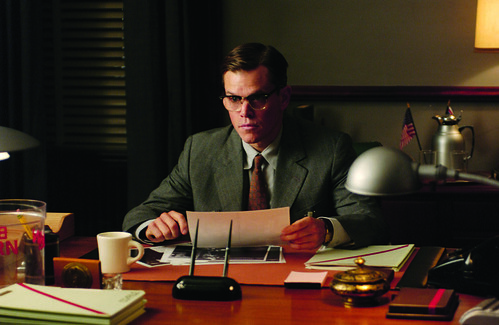 of Edward Wilson requires both of these characteristics to come through, and Damon succeeds for the most part.  Much as with Tom Ripley, Wilson is someone that does not let his emotions show through his face, and consequently Damon’s portrayal of him is similar to that of his Ripley.  Damon is thoroughly believable here as one of the men that helped form the CIA.  Both Wilson’s family and the audience have a tough time relating to Wilson as he doesn’t let either in.  Wilson’s loves are obvious, but both the precise nature of those loves and all of his other feelings are less so.

As for the rest of the cast, despite some accent problems here and there they are largely very good in their roles.  Looking at the list of names there’s no reason why they shouldn’t be.  However, the plethora of stars that appear eventually serve to distract from the film as a whole.  Timothy Hutton has one 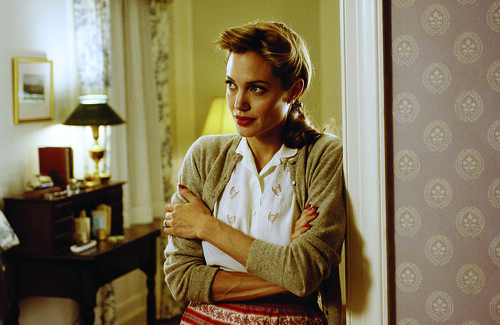 scene.  Joe Pesci has one scene.  Alec Baldwin has three or four.  And while each actor does a fine job, there’s a point at which the audience begins to simply look for the next cameo, or try to guess if they’re watching one right then, rather than paying enough attention to the film.

In more lighthearted fare this may not prove to be an issue, but The Good Shepherd is quite intricately plotted and requires all the attention that an audience member can devote to it.  The film dances back and forth between Wilson’s current predicament following the botched Bay of Pigs invasion and a mysterious photograph he was sent with an audio recording, and his entrance into military intelligence and subsequent trip up the ladder.  Along the way there are, of course, complications.  These range from getting a girl (Angelina Jolie) pregnant and marrying her, to getting caught by the Russians when he cheats on his wife, to trying to keep his wife out of his professional life.

Throughout the film Wilson seems in control of his professional life, it is made very clear 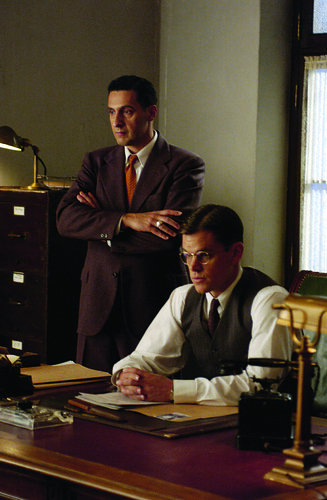 that he is good at his work, but is a complete disaster at his personal life.  The film does its best to spend an adequate amount of time on both, and the two do intersect, but both sides seem to get short shrift.  Yet, with a runtime of two hours and forty minutes, the film is anything but brief.  It’s neither overly long, nor tedious, but should be able to do a better job fully exploring both Wilson’s private and public life over its runtime.

When a film takes place over a long period of time it is essential that the characters are seen to age, and The Good Shepherd has some problems in this regard.  Despite the movie’s 20-plus year time span, Edward Wilson barely seems to age at all.  For some reason, the makeup used during the early 1960s sequences don’t make him look significantly older than he looks during the late 1930s sequences.  Many of the characters around Damon do seem to age appropriately, but Damon barely looks any older by the end of the film.  This problem can make it somewhat difficult to determine when a jump from the past to present has occurred and makes an already complex film somewhat harder to follow.

A perfect film The Good Shepherd isn’t.  It does however provide a fascinating, though fictionalized, account of our nation’s intelligence gathering services.  With good performances and an intriguing plot it does provide an interesting enough diversion to be well worth another trip to the theaters this holiday season.