It is surprising how often a film is a hit at film festivals, but gets at best a mixed reception from the critics and audience when it gets wider release. David MacKenzie’s Perfect Sense, set for release in the U.S. in February is a case in point. It was well received at the 2011 Sundance festival and won the prize for the best new British feature at the Edinburgh Festival—no mean credentials. The critical reaction since has been decidedly mixed, if not downright negative. 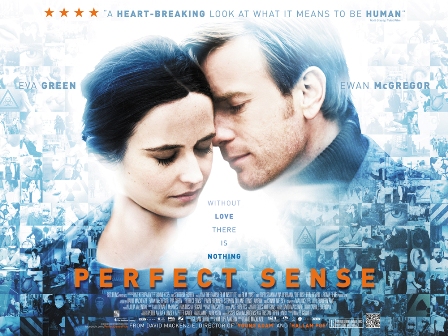 On the face of it, the film would seem to have a lot going for it. There is a talented cast led by Ewan McGregor and Eva Green. There is an intriguing script by the Danish writer, Kim Fupz Aakeson. It is the kind of story that should have a lot going for it as it tries to combine romance and menace with intellectual complexity. The city of Glasgow in which the film is set is beautifully shot. At times it has a poetry about it.

McGregor plays a talented chef incapable of meaningful emotional commitments. Green is an epidemiologist who also has problems with romantic attachments. They come together as the world around them seems to be falling apart as a result of the sudden emergence of a strange disease that is causing sensory loss not only in Glasgow, but all over the world. The disease begins with an intense emotional experience, at first an overwhelming sadness, and then the loss of one of the senses.

There is a period of calm as people get used to living with the change. Then it starts again. McGregor and Green search for love as the world seems disintegrates around them. There is calamity, but life, as the narrator keeps telling us, goes on.

This should make for exciting cinema, and it almost does. If there is a problem, it lies in the film’s inability to seamlessly mesh its emotional and intellectual content. It is difficult to feel much for the central characters. They are essentially unlikeable people. They keep referring to themselves as “assholes,” and they are right. McGregor is introduced throwing on one night stand out of his bed. Green later does the same to him.

Moreover their relationship seems insignificant in the light of the chaos developing around them. Since it is difficult to emotionally identify with them, it is the intellectual content of the film than gets the viewer’s focus. It plays more like a puzzle that needs to be solved. Puzzles are fine. They exercise the brain. They pass the time pleasantly. They challenge outside the box thinking. A great film needs to make an emotional impact.