Barry Levinson and Robin Williams team up for a new political comedy. Should you vote for them?

Movie Review: Man of the Year

The basic premise is that Tom Dobbs (Robin Williams), the host of a political-based comedy show a la The Daily Show with Jon Stewart or Real Time with Bill Maher decides to run for President. This takes place just as a computer company has secured the rights to provide electronic voting machines for every polling station in the country for the upcoming election. One of the employees there, Eleanor Green (Laura Linney), notices an irregularity in the software and attempts to report it to the company’s president. In order to not hurt stock prices, the memo is buried and Green is told any irregularities have been fixed. They of course haven’t, and as a result of the computer glitch, Dobbs is elected President. The rest of the movie deals with Green trying to fix the problem, going to Dobbs for help, as her company tries to first discredit, and subsequently eliminate, her.

The film is a slightly-skewed mirror-image of reality. People have started wearing t-shirts and putting bumper stickers on their cars promoting Jon Stewart for President in 2008.  Stewart has said he won’t run, and that the entire notion is silly, but what would happen if he did? 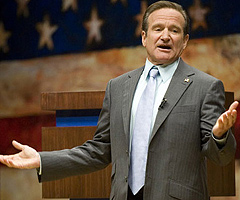 Tellingly, the two major party candidates that Dobbs runs against are named Kellogg and Mills (as in General). They have all the substance and gravitas of breakfast cereal and as candidates should be taken as such. Of course, they're not terribly different from the candidates we see all the time. Like real candidates, they are easy targets, and the film makes the most of them.

Satirists like Stewart, Maher, and Williams’ character in this movie have the ability to call things as they are; they are not beholden to anyone or anything, and love to point out the foolishness of those who are. Thus, a lot of what they say makes sense. During the debate, Dobbs points out that one of the candidates can't truly be for hydrogen fueled vehicles since that would effectively destroy the oil companies which have supported the candidate financially. It’s a smart point, just one of the many Dobbs scores during the debate.

Once Dobbs is declared the winner of the election, the film takes a turn from comedy to thriller, as Linney’s character is hunted down when she attempts to reveal the irregularities in the voting software. Again here, the film goes just beyond the believable but shaves it so close that it is hard to tell where the reality ends. We see examples all the time of corporate greed and excess getting in the way of honesty and good sense.  Is it that outlandish to believe that someone would cover up a software mistake if it would hurt the company’s stock? No. What if the software mistake influenced a Presidential election? How greedy would those in charge have to be in order to cover that up?

Jeff Goldblum, playing the CEO’s right-hand man, makes the case that even if the result of the election was wrong, democracy itself is preserved by the act of voting. According to his argument, once the election results are called into question, that’s when democracy suffers, that’s when people lose faith and that’s when there’s an issue. The argument of course goes too far and gets a little silly, but only a little.

Our society is becoming more and more disenchanted with our politicians and their actions, but things seem to only be getting worse. Special interest groups show no signs of going away. Corporate dishonesty and fraud seem omnipresent. What if someone that wasn’t beholden to anyone else was elected President? What if someone that had the guts to do the right thing and help the people of the world was elected? What if Jon Stewart did run for President, would that really be a bad thing?

The entire cast of the movie give a strong performance. Robin Williams gets to do some political standup on the campaign trail which, while not saying anything new, is truly funny. Christopher Walken does a good job as well, and even eschews, at least partially, doing the caricature of himself that he seems to put on so often in recent years. Laura Linney delivers a solid performance. While she’s in the thriller part of the film, which at times seems an entirely different movie from the comedy part, she’s equally compelling.

The biggest problem with the film is not that it isn’t always fresh and new, but rather that it’s two distinct movies that sometimes have the feel of being uneasily meshed together. There is the comedy part and there’s the thriller part. At times this mix seems to work, but there are other moments when it is moderately disconcerting. Except for their scenes together, one could forget that the Laura Linney movie and the Robin Williams one are the same.

It’s either a funny movie about a serious issue or a serious movie about a funny issue.  Whichever it may be, Levinson does a wonderful job of blurring the line between reality and absurdity. And even if the concept isn’t the newest it certainly seems fresh in his hands.

The biggest problem with the film is that while all the barbs and critiques leveled at politics and political parties in this country are legitimate, nothing will be done to modify the actions and attitudes of those who sit in elected office.