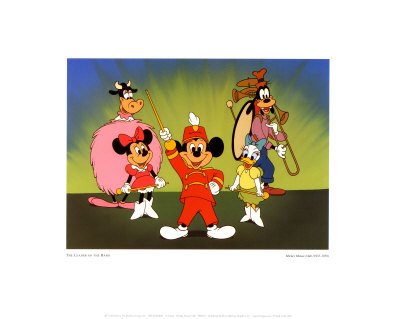 Disneyland and The Mickey Mouse Club share their 50th anniversaries in 2005, and 10 of the original Mouseketeers are returning to Disneyland on Monday, October 3, to celebrate the golden milestone (I’m not sure which 10, however, hmm).

In a ceremony in front of Sleeping Beauty Castle, the Mouseketeers will reflect on 50 years of “Mouske-Memories” in story and song before unveiling the world’s largest pair of “Mouseketeer Ears” – nearly 1,000 honorary Mouseketeers filling the forecourt of the castle. Seen from above — and to the strains of the familiar “Mickey Mouse Club Alma Mater” — the iconic black ears with the “Mickey Mouse Club” logo will “come alive” and be transformed to mark the occasion.

The Mickey Mouse Club made its national television premiere on Monday, October 3, 1955, on the ABC television network. The Mouseketeers were a well-scrubbed and multi-talented cast of youths who starred in a variety series that included cartoons, music and live-action adventures. The show began with the “Mickey Mouse Club March” (“Who’s the leader of the club …”) and ended with “The Mickey Mouse Club Alma Mater,” with the famous: “M – I – C — See ya real soon — K – E – Y — Why? Because we like you! M – O – U – S – E.”

The Mouseketeers were first introduced to the public during the live broadcast of the Disneyland opening day festivities, televised nationwide on Sunday, July 17, 1955. They were featured in the inaugural Main Street parade and were showcased with their very own musical production number. All 24 initial Mouseketeers performed the “Talent Round-Up” song at the Mickey Mouse Club Theater in Fantasyland, culminating in the soon-to-become familiar “Mouseketeer Roll Call.” Over the course of a four-year run (1955-1959), 39 original Mouseketeers appeared on the show.

The show was revived in 1977 as The New Mickey Mouse Club with a new cast of Mouseketeers. From 1989-1994, the MMC was broadcast on The Disney Channel and launched the careers of such successful performers as Christina Aguilera, J.C. Chasez, Ryan Gosling, Keri Russell, Britney Spears and Justin Timberlake.

Additional upcoming milestones and celebrations include the January opening of the all-new attraction “Monsters, Inc. — Mike & Sulley to the Rescue” at Disney’s California Adventure and the 40th anniversary of “it’s a small world.”