It can be said without much fear of contradiction that Debbie Rowe, Michael Jackson’s ex-wife and mother of his two oldest children, did not testify as expected over a total of about three hours Wednesday afternoon and Thursday morning.

Yesterday she identified herself as Deborah Rowe Jackson, but said she preferred “Ms. Rowe.” Senior Deputy District Attorney Ron Zonen asked how she knew Jackson. She said, “We’ve been friends and we were married.” When asked if they had ever lived together, she said, “We never shared a home.”

Rowe said she her videotaped interview requested by the Jackson camp had not been scripted. “As Mr. Jackson knows, no one can tell me what to say. I speak my own mind. It was a cold interview, and I wanted to keep it that way.”

Zonen asked her what she expected after she gave the interview. “To be reunited with the children and be reacquainted with their dad.” Asked why she wanted to see Mr. Jackson again, she said, “He’s my friend.” 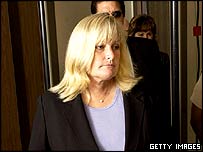 In early 2003 she received a call through the doctor who brought her together with Jackson. He told her that Jackson associate Marc Schaffel, an unindicted co-conspirator in the case, wanted to talk with her.

Mr. Jackson spoke briefly during that phone conversation. “He told me there was a bad video coming out and it was full of lies and would I help. I said, as always, yes. I asked him if he was OK. I was very upset.”

“Did he tell you with any specificity what he wanted you to do?” asked prosecutor Zonen. “No,” she said, there was “no quid pro quo.” Asked why she would help Jackson, she said, “I promised him I would always be there for Michael and the children.”

When Zonen asked Rowe if she always told the truth in the interview, she said “No.” She said she didn’t answer honestly when the interviewer asked her if Jackson had good parenting skills with their children. Asked why she didn’t tell the truth, she said, “My personal life is my personal life and no one’s business.” She said her positive statements about Jackson’s role with children were based on past experience. “I’ve seen him with kids the whole time I’ve known him,” she said.

She resumed testimony this morning.

“What was your motivation to participate in the interview?” Zonen asked.

“To see my children.” However, her request was not granted and she has not seen them since 1999.

She said Schaffel periodically yelled out suggestions during the taping and asked the interviewer to rephrase questions. “Did you, in fact, change” comments? asked Zonen.

“I only did it if it didn’t change the meaning of what I had to say.”

Lead defense attorney Thomas A. Mesereau Jr. took over for cross-examination. He asked Rowe about the relationships between Jackson and aides Schaffel, Ronald Konitzer and Dieter Wiesner, unindicted co-conspirators all. “I think they’re opportunistic vultures,” she said.

“Do you remember telling officers when you were interviewed that Michael is very, very easily manipulated, especially if he is scared?” Mesereau asked.

She said of Schaffel, “He just bragged about how he had taken advantage of an opportunity. He said he was going to make sure Michael’s career was saved.

“He’s like everybody else around Mr. Jackson. He wouldn’t tell him everything. Obviously he’s full of shit … He was out to hurt Michael and in addition he would hurt my children.”

She praised Jackson. “He’s generous to a fault … giving and kind … a good father … There are different Michaels. There is like my Michael [tears] and there is the Michael everyone else sees.”

“That would be Michael the entertainer?” Mesereau asked.

Rowe acknowledged that Jackson was preventing her from seeing the children –“He’s their father, ultimately it’s his decision” — but said she considers Jackson a friend. “And you still do?” asked Mesereau.

She continues to fight in Los Angeles Family Court with Jackson over custody and visitation rights for her children, but said after so many years, returning to them now as their mother would be “complicated … I can’t walk in and say, ‘I’m your mom, want to go out?'”

Rowe’s lawyer since 1996, Iris Joan Finsilver, followed her to the stand and described what she saw when she watched Rowe tape the “rebuttal video” with Schaffel. “When she would give a favorable answer,” Schaffel “would say, ‘Oh Michael will be very, very pleased. You’ll go to Neverland and you’ll see your kids.'”

But she hasn’t yet – “complicated” is right. If you ask me what Rowe’s unexpectedly positive testimony toward Jackson means — and it seemed to catch the defense off-guard as well — honestly, I don’t really know, although I have heard some familiar with Rowe say she is still “obsessed” with Jackson.