The world is still a very big place, but Michael Jackson keeps making it smaller for himself, burning bridges and narrowing his options little by little each step of the way. He is currently camped in Ireland, having worn out his welcome in the U.S. and Bahrain, but there is likely no truth whatsoever to rumors that Jackson is scouting Superman’s polar Fortress of Solitude in case things turns sour on the Emerald Isle.

The U.S. appears to be out for Jackson for any number of somewhat mysterious reasons, including pride and the possibility of lingering legal liabilities. Jackson hasn’t (officially) returned to his homeland since shortly after he was acquitted of child molestation and conspiracy charges in the summer of ’05.

Bahrain, where he retreated after the verdict, is now just sand in the suitcase – the desert has lost its allure, and Jackson’s benefactor, Bahraini prince Abdulla Hamad Al-Khalifa, appears to be left out in the cold, er, hot, after pampering Jackson like royalty for a year and supporting his cause to the tune of a few million dollars.

Over the weekend Jackson’s spokes-apologist, Raymone K. Bain issued a statement confirming that Jackson’s relationship with five-month-old record label, Two Seas, his joint venture with Abdulla, was over.

In April, Bain had announced to great fanfare the formation of the label and proclaimed that the first single from Jackson’s renewed recording efforts — produced by MJ and Bruce Swedien — would be called “Now That I Found Love.” It would be released on the new label on precisely November 21, and a new album would be forthcoming in ’07. Guy Holmes, chairman of U.K. indie Gut Records (Crazy Frog’s “Axel F”), was named the new label’s CEO.

But none of that is important or applicable anymore — Holmes told the BBC no deal had ever been finalized — just like Jackson’s vaunted megastar charity single for survivors of Hurricane Katrina that was reported to be “nearing completion” last November, but never quite materialized either.

The writing had been on the hijab for some time: Having renegotiated his crushing debt and at least temporarily put his financial house in some semblance of order, Jackson, 48, pulled up his tent stakes in June and ended up frolicking among the Little People o’ the Green at the deluxe Luggala Lodge (AKA “Luggala Castle”) in County Wicklow, Ireland, not far from Dublin.

There he remains, feverishly plotting his comeback like Norma Desmond and renegotiating from across the pond his parenting arrangement with ex-wife and biological mother of his two older children (Prince Michael 9, Paris 8), Debbie Rowe. 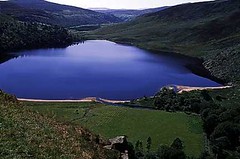 Jackson’s posh quarters at Luggala — costing him in the neighborhood of $30,000 per week — was originally built in 1787 and is owned by Garech Browne, a member of the Guinness brewing family. The exclusive retreat was famous for the “raffish weekends” thrown back in the day by the present owner’s mother, Oonagh Guinness, one of the “Golden Guinness girls.” 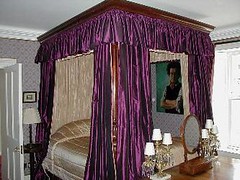 A recent hideaway of other stars such as Mel Gibson and Orlando Bloom, the lavish seven-bedroom lodge and lush 6,000-acre grounds are also used frequently for film locations, most recently King Arthur.

So enamored of his new quarters and surrounding shamrocky shenanigans is Jackson, that earlier this month the Irish tab Daily Mirror had a hoot of a time reporting, “Madcap Michael Jackson wants to build a Disneyland-style theme park in Ireland called Leprechaun Land,” which the “moonwalking singer would fill … with rides based on Irish myths and legends, traditional music … plenty of Guinness for thirsty adults … and dozens of dwarfs dressed as leprechauns.”

Bain dismissed the report as “erroneous and ridiculous.” Sadly, that now describes her boss as well.