So was it really a “joke” when Keith Richards told NME in an interview published yesterday that he had inhaled his cremated father in 2002? Or was the heat so hot that a retraction was prudent regardless of the olfactory reality?

Today, Stones spokesman Bernard Doherty of LD Communications, said in a statement that “It was an off-the-cuff remark, a joke, and it is not true. File under April Fool’s joke.” Doherty was tight-lipped about why the staggering Stone would make such a peculiar declaration in the first place. 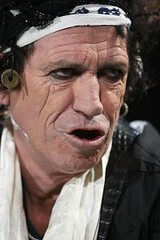 “The strangest thing I’ve tried to snort? My father. I snorted my father,” Keith was quoted by NME. “He was cremated and I couldn’t resist grinding him up with a little bit of blow. My dad wouldn’t have cared … It went down pretty well, and I’m still alive.”

Whether this disconcerting act happened in Keith’s mind or in reality, the very notion is fraught with a cesspool of oedipal/Freudian/necrophagous threads whirling around in a brain that has a date with Science whenever its owner takes his leave from this mortal coil.

In an disturbingly fitting way, Richards will be appearing as Johnny Depp’s piratical father in the much anticipated May 25 release of Pirates of the Caribbean: At World’s End, the final of the Pirates trilogy.

In other recent Stones phenomena, the wrinkly rockers released a schedule of over 20 dates for their summer Bigger Bang Tour of Europe, including a first-ever stop at the UK’s legendary Isle of Wight Festival: