The media machinery is scarcely able to control its glee with the approach of the Michael Jackson child molestation trial at the end of the month, most giddy of all are Court TV for obvious reasons, and E!, well, also for obvious reasons.

While Court TV has a lurid special section on Jackson, will air a special on the King of Pop’s psychological state next month, and have analyst Diane Dimond interpreting every salacious word, E! is going a step further and actually REENACTING the trial, according to a press release from yesterday:

Using re-enactments of verbatim court transcripts, this series will accurately highlight portions of the previous day’s testimony and happenings in the courtroom. On E!, the series will also include expert commentary by a panel of legal analysts. The partnership involves five daily half-hour programs which will run over the course of the trial. The series is produced by E! News and Sky News. Each network will package the re-enactments to create its own program with its own presenters, hosts and branding.

In making the announcement on behalf or E! Entertainment Television, Mr. Harbert said: “Viewers around the world are interested in this trial and with no cameras in the court room, this series will be an excellent way to keep up with the day’s events and bring the trial to life.”

Ms. Airey commented: “This is a highly innovative programming initiative drawing on the re-enactments with actors which Sky News pioneered during The Hutton Inquiry in 2003. Sky News and Sky One viewers will be kept fully up to speed with all the latest developments in one of the most eagerly anticipated trials in years.”

The Michael Jackson trial is scheduled to air daily Monday through Friday on E! Entertainment Television, with a weekend wrap-up show airing each Saturday.

My mind is racing in several directions at once, but this statement is particularly disconcerting: “accurately highlight portions of the previous day’s testimony and happenings in the courtroom.”

Does this mean they will be reenacting events depicted in the testimony, and not just reenacting the courtroom scene itself? Are we going to see a Jackson-actor playing “Jesus juice and fiddle about” with a boy-victim actor? What is this show going to be rated? I hope the v-chips can handle the strain.

Meanwhile, the Smoking Gun site, which coincidentally is now owned by Court TV, has compiled what it calls “an authoritative, behind-the-scenes account of the prosecution’s case against the King of Pop … based on a review of confidential law enforcement and government reports, grand jury testimony, and sealed court records provided to TSG by sources.”

It is some grim, nauseating stuff:

The heart of the Jackson prosecution rests largely on accounts provided to investigators by the teenage boy, his younger brother, older sister, and the children’s mother (at the time of the alleged molestation, the victim, who had been diagnosed with a rare cancer in 2000, was 13, his brother was 12, and their sister was 16). In the documents reviewed by TSG, the brothers appear a potent one-two punch of first-hand accounts of alleged Jackson misdeeds. They corroborated many of each other’s lurid stories, providing the Santa Barbara Sheriff’s Department and District Attorney Thomas Sneddon with a stereophonic sleaze compendium.

On the other hand

The children’s 36-year-old mother is, of course, a principal target of the Jackson defense team, which views her as a scheming grifter who has fabricated the abuse accounts, programmed these tawdry tales of masturbation and soiled underwear into her children, and, despite assertions that she is not chasing money, is expecting some kind of future financial windfall. The confidential law enforcement records also document how the family’s story changed shortly after the mother hired legal counsel in mid-2003. Until that point, the family had vehemently denied any improprieties by Jackson in interviews with Los Angeles child welfare officials and Santa Barbara Sheriff’s deputies. And they sang Jackson’s praises in the rebuttal videotape shot by Schaffel’s film crew two weeks after the Bashir documentary aired on ABC’s “20/20.” In addition, Jackson’s lawyers have pointed out that, according to Sneddon, the alleged conspiracy to silence the family began more than two weeks before the first molestation incident is alleged to have occurred. The cover-up, Team Jackson argues, began before any crimes occurred…

You want details, you get details: this paragraph is more than enough for our pages:

The boy told investigators that Jackson similarly masturbated him on succeeding nights when his younger brother was not also sleeping in Jackson’s bedroom. The boy claimed that after he ejaculated in his pants, Jackson directed him to place his soiled underwear into Jackson’s hamper before showering. The Hanes garments were not returned, he reported, and Jackson provided him with new underwear. When sheriff’s deputies raided Neverland in November 2003, a search warrant authorized them to seize underwear belonging to the alleged victim, “described as white cotton ‘Hanes’ brand briefs, size ‘small.'” A nine-page inventory of items seized from Jackson’s home–which TSG has reviewed–reveals that agents confiscated white boys Hanes underwear from the bathroom of Paris Jackson, the entertainer’s six-year-old daughter.

My reading of the assembled evidence and allegations leads me, personally, to conclude the kidnapping and conspiracy charges have likely been exaggerated, but that Jackson is a pedophile, most likely a serial pedophile. 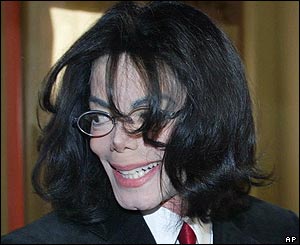 Regarding the serial aspect, today the judge in the case delayed ruling on whether accusations of past abuse by Jackson could be admitted at trial. Santa Barbara Superior Court Judge Rodney Melville also said he was unlikely to conduct such hearings in secret. Prosecutors are seeking to introduce evidence of what they describe as his “prior sexual offenses,” even though Jackson has never been tried in a court on those issues. The judge also ordered TV correspondent Martin Bashir to come to California to testify in the trial on March 1. Bashir produced the 2003 TV documentary in which Jackson said that he let children sleep in his bed, setting the wheels of the current case in motion.